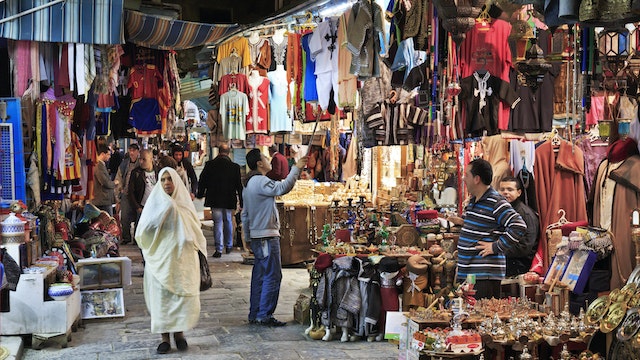 This sprawling maze of ancient streets and alleyways is one of the most impressive medieval medinas in North Africa and one of Tunisia's great treasures. It's home to numerous covered souqs selling everything from shoes to shisha pipes, as well as bustling cafes, back streets full of artisans at work and residential areas punctuated by grand, brightly painted doorways. Historic palaces, hammams, mosques and madrassas (schools for study of the Quran) are scattered throughout, many lavishly decorated with tiles, carved stucco and marble columns.

The medina’s architecture is ideal for the local climate, with narrow streets that are cool in summer and warm in winter. As space within the medina's original walls ran out, residents built upwards, constructing vaults and rooms above the streets. (Vaults had to be built high enough to accommodate a loaded camel.) This gives the central lanes a subterranean feel, with shafts of sunlight filtering through.

In the 19th century, the French developed the Ville Nouvelle (now Centre Ville), shifting the city’s centre of power. The city’s great families began to leave their ancestral homes for suburban seaside pads, and the medina declined, housing rural people newly settling in the capital. Zaouias (the complexes surrounding the tombs of saints) and palaces were converted to cope with the new arrivals.

Large parts of the northern section were demolished in the 1930s and 1940s to clear the slums and improve vehicle access. Fortunately, several organisations are now devoted to conservation, and any work you see is hopefully in the name of preservation. Note that the medina’s walls are no longer made of bricks and mortar, as its boundaries now consist of a mix of buildings and streets. And where there were once 12 babs (gates), there are now only five.

Early morning – when all is serene apart from merchants setting up shop and catching up with their neighbours over a fragrant mint tea – is an atmospheric time to explore. At other times, the main drags of Rue de la Kasbah and Rue Jamaa Ezzitouna can be unbearably hot, crowded and noisy. Fortunately, the crush dissipates a few streets either side.

When here, be sure to wander down Rue Sidi Ben Arous (named after a 13th-century mystic and professor) and its continuations Rue Dar El Jeld and Rue du Pacha. This will take you through the most attractive section of the medina, restored under the auspices of the Association de Sauvegarde de la Médina de Tunis and full of mansions and mausoleums; the wonderful Souq des Chechias runs off Rue Sidi Ben Arous. Other interesting routes include Rue Tourbet El Bey, which runs between the Zitouna Mosque and the medina's southern edge; and the covered souqs and streets just north of the Zitouna Mosque, which include the hugely atmospheric Souq El Attarine and Rue du Tamis.

Most shops close on Sundays, and many close on Friday afternoons. Though approximately 20,000 people still live within the medina, the area around Pl de la Kasbah and the streets outside Bab Souika and Bab Jedid are the only pockets where there is any street life in the evenings.