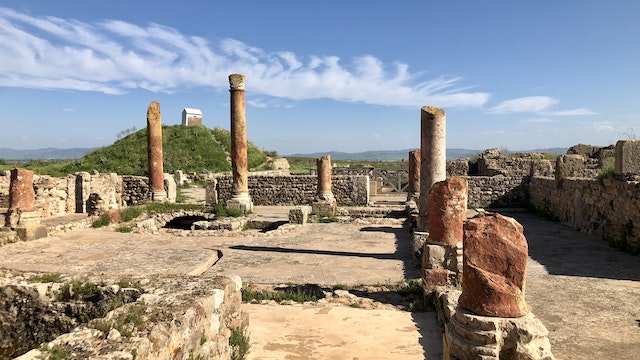 Famed for its extraordinary underground villas, the Roman city of Bulla Regia, 7km northwest of Jendouba, offers a rare opportunity to walk into complete, superbly preserved Roman rooms rather than having to extrapolate how things once looked from waist-high walls. To escape the summer heat, locals retreated below the surface, building elegant homes complete with colonnaded courtyards and internal plumbing. Many of their fine mosaics remain in situ, though some of the best are now in the Bardo Museum in Tunis.

Bulla emerged in about the 5th century BC under Carthage. The ‘Regia’ (royal) was added later when it became the capital of one of the short-lived Numidian kingdoms tolerated by Rome following the destruction of Carthage. Bulla Regia truly flourished under Roman rule, particularly in the 2nd and 3rd centuries AD, as its citizens grew rich on wheat; most of the site’s buildings date from that era.

Guides are available at the ticket office, of whom the best is Amel Ayadi, who has worked here for more than 15 years.

The colossal Memmian Baths (Thermes) that overlook the entrance were named after Julia Memmia, wife of Emperor Septimius Severus. The most extensive of the site’s above-ground structures, its rooms are surrounded by arched service areas – a reminder of the slaves who kept the waters hot and Roman backs scrubbed.

Walking northwards, following the signs to the Quartier des Maisons (villas quarter), takes you to the city’s wealthiest residential neighbourhood. The villas – seven of which have been excavated – vary in their level of sophistication but are all built to the same basic plan, with a central courtyard open to the sky. As you descend into each, you’ll feel a significant drop in temperature – just what the Romans intended.

The first home you come to is the small, subterranean House of Treasure (Maison du Trésor), named after a cache of Byzantine coins discovered here. The large dining room is decorated with a geometrically patterned mosaic; next door is a bedroom.

Continuing north, you pass two side-by-side, 6th-century Byzantine churches (basilique chrétienne), with some columns and a walk-in, cross-shaped baptismal font. North of here is the rather unloved-feeling, subterranean House of the Peacock, named after a mosaic that’s now in the Bardo.

Across the road is the truly impressive House of the Hunt (Maison de la Chasse), centred on an underground hall with eight ornate pillars; hexagonal holes at the top of each cleverly reduce the structure’s weight. Off the courtyard is a spacious mosaic-floored dining room, an indication of the lavish lifestyle once enjoyed here. Upstairs are some neat, side-by-side latrines, next to the building’s private hammam – this place was really state of the art.

Next door, an above-ground hunting mosaic has been left in situ at the House of the New Hunt (Maison de la Nouvelle Chasse). Large chunks are missing, but there’s still plenty left to view, including an action-packed lion hunt. Underground is a five-column hall with a swirling geometric floor.

Take the path east and then north to Bulla Regia’s star attraction, the House of Amphitrite; the entrance is near the metal grate in the pavement. The underground mosaic is exquisite – a perfectly preserved portrait of a nude Venus flanked by two centaurs, one shocked (having his hair tugged), the other quizzical. At the base are some lively cupids riding dolphins – one of them is checking himself out in a mirror at the same time. Leaping fish add to the vibrancy and balance of this masterpiece.

South of here is the spacious House of Fishing (Maison de la Pêche), the earliest of the villas. This place had a fountain in the basement; a small room contains a mosaic with a fishing theme.

Heading southeast, you’ll pass on your left the spring that once supplied ancient Bulla Regia with water – and still delivers its cool waters to nearby Jendouba. There’s a fine panorama from atop the nearby mound.

Walking east and then south will take you to the forum, surrounded by the ruins of two temples – the capitol, to the west; and, to the north, the Temple of Apollo, which yielded the truly godlike statue of Apollo displayed at the Bardo.

Just south of here is the market, and a little further down is a small but beautifully preserved theatre with a large mosaic of a not-very-fierce bear. The front three tiers are extra wide and separated from the rest by the remains of a low wall – VIP seating. Southwest are the remains of the small Temple of Isis, which honoured the Egyptian goddess, a fashionable addition to the Roman pantheon.

The hill south of the ticket office is covered with Neolithic dolmen graves.

The turn-off to Bulla Regia is about 4km north of the agricultural town Jendouba on the road to Tabarka and Ain Draham; from there, the site is 3km east. Any bus or louage (shared taxi) travelling between Jendouba and Tabarka or Ain Draham can drop you off at the Bulla Regia turn-off, from where it’s a pleasant 3km walk (if it’s not too hot).

A taxi from Jendouba costs about 5DT one-way.