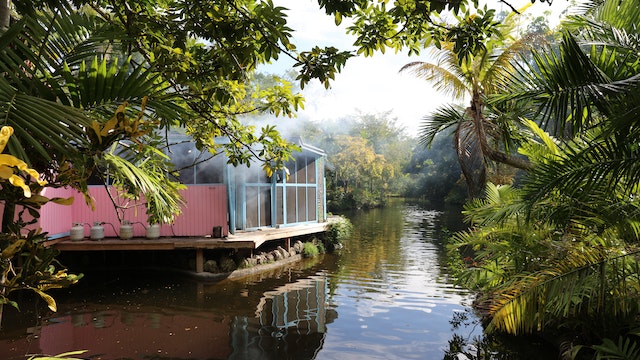 The west end of Grand Bahama is mostly scrub pine and asphalt, so finding this green maze of walkways, trees and water features is like discovering an oasis. The gardens are named not for the leafy glades but for Wallace Groves, the controversial financier who transformed Freeport and Lucaya from sleepy backwaters into essential stops for the international jet set. Today, nearly fifty years after the first shrubs were planted, the gardens are a green, serene escape from the built-up buzz of Freeport.

Exploring the Garden of the Groves

The Garden of the Groves has been through a lot over the years. The city of Freeport has expanded almost to the front gates, and Hurricane Frances raged through in 2004, followed by Hurricane Dorian in 2019. But with support from local people, the gardens have bounced back every time, and today, there are more than 10,000 species of flowers, shrubs and trees making a green bower of the five hectares of grounds.

A walking trail meanders through groves of tamarind and Java plum trees, past cascading (man-made) waterfalls, a placid lagoon and a tiny 19th-century hilltop chapel that has become a popular spot for wedding ceremonies. There's a big playground and a calm cafe, serving conch burgers, juices and cocktails, and the spiritually minded can take a meditative stroll through the limestone labyrinth, a replica of the one in the cathedral at Chartres in France.

Kids will dig the tropical birds and butterflies who swing by the gardens, and the raccoon habitat, where specimens caught causing trouble elsewhere on the island are bought to retire in comfortable captivity. The Bahamian raccoon is believed to have arrived with seafarers from Guadeloupe in the 19th century, and these imported critters cause havoc for local bird and reptile life, hence the relocation program.

It's worth saying something about Wallace Groves, the gardens' controversial namesake. The larger-than-life financier moved to Grand Bahama from the US after serving two years in prison for fraud and conspiracy, and set about transforming the island, building a new business empire on lumber, casinos, and–it's claimed–backhanders to and from members of the Bahamian elite and the Miami Mob. He certainly put Grand Bahama on the map, and the gardens are one of the best parts of his legacy.

Getting to the Garden of the Groves

The Garden of the Groves is several kilometers east of Freeport on Midshipman Rd; the island's minibuses are fairly relaxed about following fixed routes, and drivers will take you to the gardens for about BS$5 if you request it. Alternatively, take a taxi or rent a car or scooter.