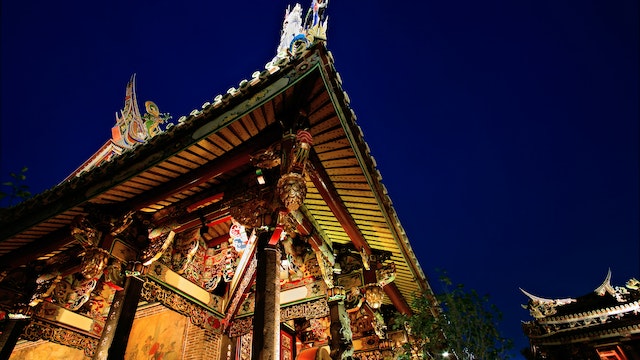 Recipient of a Unesco Asia-Pacific Heritage Award for both its restoration and its revival of temple rites and festivities, Bao'an Temple (also called Dalongdong Bao'an Temple) is a must-visit when in Taipei. This exquisite structure is loaded with prime examples of the traditional decorative arts, and the yearly folk arts festival (April to June) is a showcase of traditional performance arts.

The temple was founded in 1760 by immigrants from Xiamen, Fujian province, and its modern size and design began to take shape in 1805. The main resident god is Emperor Baosheng (or Wu), a historical figure revered for his medical skills. The rear shrine is dedicated to Shennong, the god of agriculture.

From 1995 to 2002, the temple underwent its largest renovation project ever. Under sound management, skilled artisans were employed and top-quality materials used. In addition, the temple began holding an annual folk-arts festival (called Baosheng Cultural Festival), which includes the Five Day Completion Rituals to Thank Gods (essentially to transform the temple from an everyday to a sacred space), the gods' birthday celebrations, lion dances, parades, Taiwanese opera performances and even free Chinese-medicine clinics. See the temple's website for dates of events, all of which are free.

There’s an information office, with a brochure on Bao’an and a small selection of English-language books, at the rear of the temple’s inner courtyard.