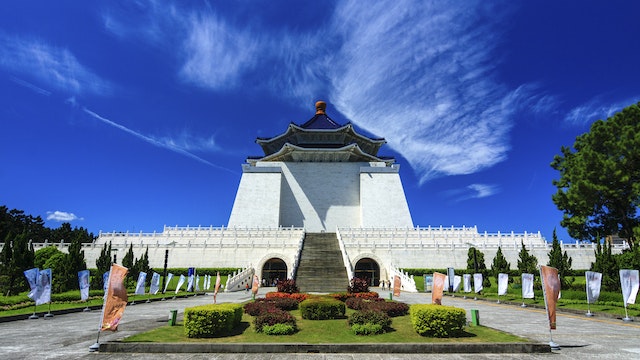 This grandiose monument to authoritarian leader Chiang Kai-shek is a popular attraction and rightly so. It is a sobering feeling to stand in the massive courtyard. Chiang's blue-roofed hall is a prime example of the neoclassical style, favoured by CKS as a counterpoint to the Cultural Revolution's destruction of genuine classical culture in China. Note the main hall shuts at 6pm, but the surrounding park is open 5am to midnight.

Entrance to the main hall is made via a series of 89 steps (Chiang's age when he died). Inside the cavernous hall is an artefact museum with Chiang's two Cadillacs, various documents and articles from daily life. The hourly changing of the honour guard is probably the most popular sight with most visitors. The flag raising at dawn and lowering at dusk is also conducted with pomp and is popular with local tourists.

Some eclectic and very excellent exhibitions are held in two halls next to Chiang's, which are generally ticketed. Some past shows include art by Andy Warhol, pieces from the British Museum and sketches from Japan's Studio Ghibli (of Spirited Away fame).

In 2007, the square in front of the hall was renamed 'Liberty Square' in honour of Taiwan's long road to democracy, and for a time it was conceivable that the memorial itself would also be renamed and the Chiang sculpture removed. That didn't happen, and the reasons (which will vary depending on who you ask) pretty much summarise where modern Taiwan is at, both politically and socially. The debate rages on.