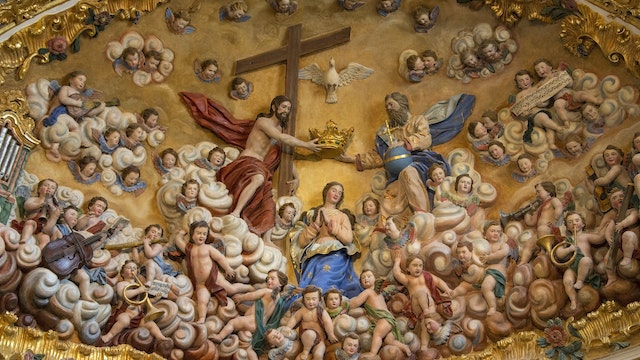 This Unesco World Heritage–listed cathedral, once a former modest Romanesque church, is a masterpiece. Work began on a grander scale in 1221; remarkably, within 40 years most of the French Gothic structure had been completed. You can enter from Plaza de Santa María for free for access to the Capilla del Santísimo Cristo, with its much-revered 13th-century crucifix, and the Capilla de Santa Tecla, with its extraordinary ceiling. However, we recommend that you visit the cathedral in its entirety.

The cathedral's twin towers went up in the 15th century; each is 84m of richly decorated Gothic fantasy surrounded by a sea of similarly intricate spires. Probably the most impressive of the portals is the Puerta del Sarmental, the main entrance for visitors – although the honour could also go to the Puerta de la Coronería, on the northwestern side, which shows Christ surrounded by the evangelists.

Inside the main sanctuary, a host of other chapels showcase the diversity of the interior, from the light and airy Capilla de la Presentación to the Capilla de la Concepción, with its gilded, 15th-century altar, and the Capilla de Santa Ana, with its gorgeous retablo (altarpiece). The Capilla del Condestable, behind the main altar, bridges Gothic and plateresque styles; highlights here include three altars watched over by unusual star-shaped vaulting in the dome. The sculptures facing the entrance to the chapel are 15th- and 16th-century masterpieces of stone carving, portraying the Passion, death, resurrection and ascension of Christ.

The main altar is a typically overwhelming piece of gold-encrusted extravagance, while directly beneath the star-vaulted central dome lies the tomb of El Cid. With so much else to catch the eye, it's easy to miss the sublime main dome, high above the main sanctuary – it's a masterpiece of the plateresque, with a few Gothic flourishes. Another highlight is Diego de Siloé's magnificent Escalera Dorada (Gilded Stairway) on the cathedral's northwestern flank.

Also worth a look is the peaceful cloister, with its sculpted medieval tombs. Off the cloister is the Capilla de Corpus Cristi, where, high on the northwestern wall, hangs what legend calls the coffin of El Cid, although doubts remain as to its origins. The adjoining Museo Catedralicio has a wealth of oil paintings, tapestries and ornate chalices, while the lower cloister covers the history of the cathedral's development, with a scale model to help you take it all in.