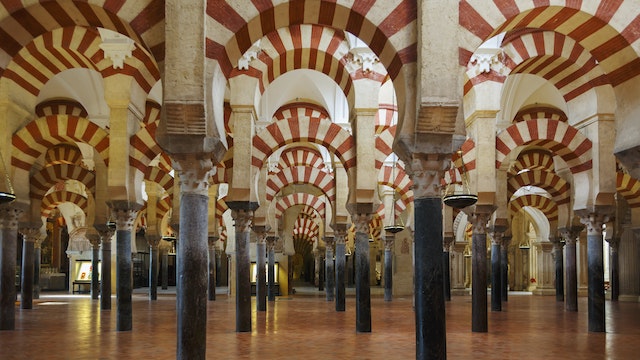 It’s impossible to overemphasise the beauty of Córdoba’s great mosque, with its remarkably serene (despite tourist crowds) and spacious interior. One of the world's greatest works of Islamic architecture, the Mezquita hints, with all its lustrous decoration, at a refined age when Muslims, Jews and Christians lived side by side and enriched their city with a heady interaction of diverse, vibrant cultures.

Arab chronicles recount how Abd ar-Rahman I purchased half of the Visigothic church of San Vicente for the Muslim community’s Friday prayers, and then, in AD 784, bought the other half on which to erect a new mosque. Three later extensions nearly quintupled the size of Abd ar-Rahman I's mosque and brought it to the form you see today – with one major alteration: a Christian cathedral plonked right in the middle of the mosque in the 16th century (hence the often-used description ‘Mezquita-Catedral’).

This lovely courtyard, with its orange, palm and cypress trees and fountains, forms the entrance to the Mezquita. It was the site of ritual ablutions before prayer in the mosque. Its most impressive entrance is the Puerta del Perdón, a 14th-century Mudéjar archway next to the bell tower. The Mezquita's ticket office is just inside here.

You can climb the 54m-high bell tower for fine panoramas and an interesting bird's-eye angle on the main Mezquita building. Up to 20 people are allowed up the tower every half hour from 9.30am to 1.30pm and 4pm to 6.30pm (to 5.30pm November to February; no afternoon visits in July or August). Tickets (€2) are sold on the inner side of the Puerta del Perdón, next to the tower: they often sell out well ahead of visit times, so it's a good idea to buy them early in the day. Originally built by Abd ar-Rahman III in 951–52 as the Mezquita's minaret, the tower was encased in a strengthened outer shell and heightened by the Christians in the 16th and 17th centuries. You can still see some caliphal vaults and arches inside.

The original minaret would have looked something like the Giralda in Seville, which was practically a copy. Córdoba’s minaret influenced all minarets built thereafter throughout the western Islamic world.

The Mezquita’s architectural uniqueness and importance lies in the fact that, structurally speaking, it was a revolutionary building for its time. Earlier major Islamic buildings such as the Dome of the Rock in Jerusalem and the Great Mosque in Damascus placed an emphasis on verticality, but the Mezquita was intended as a democratically horizontal and simple space, where the spirit could be free to roam and communicate easily with God – a kind of glorious refinement of the original simple Islamic prayer space (usually the open yard of a desert home).

Men prayed side by side on the argamasa, a floor made of compact, reddish slaked lime and sand. A flat roof, decorated with gold and multicoloured motifs, was supported by striped arches suggestive of a forest of date palms. The arches rested on, eventually, 1293 columns (of which 856 remain today). Useful leaflets in several languages are available free just inside the door by which visitors enter.

Abd ar-Rahman I’s initial prayer hall – the area immediately inside today's visitor entrance – was divided into 11 ‘naves’ by lines of arches striped in red brick and white stone. The columns of these arches were a mishmash of material collected from the earlier church on the site, Córdoba’s Roman buildings and places as far away as Constantinople. To raise the ceiling high enough to create a sense of openness, inventive builders came up with the idea of a two-tier construction, using taller columns as a base and planting shorter ones on top.

Later enlargements of the mosque, southward by Abd ar-Rahman II in the 9th century and Al-Hakim II in the 960s, and eastward by Al-Mansur in the 970s, extended it to an area of nearly 14,400 sq metres, making it one of the biggest mosques in the world. The arcades' simplicity and number give a sense of endlessness to the Mezquita.

The final Mezquita had 19 doors along its north side, filling it with light and yielding a sense of openness. Nowadays, nearly all these doorways are closed off, dampening the vibrant effect of the red-and-white double arches. Christian additions to the building, such as the solid mass of the cathedral in the centre and the 50 or so chapels around the fringes, further enclose and impose on the airy space.

Like Abd ar-Rahman II a century earlier, Al-Hakim II in the 960s lengthened the naves of the prayer hall, creating a new qiblah wall (indicating the direction of Mecca) and mihrab (prayer niche) at the south end. The bay immediately in front of the mihrab and the bays to each side form the maksura, the area where the caliphs and courtiers would have prayed. The mihrab and maksura are the most beautifully and intricately decorated parts of the whole mosque.

The greatest glory of Al-Hakim II’s extension was the portal of the mihrab – a crescent arch with a rectangular surround known as an alfiz. For the portal’s decoration, Al-Hakim asked the emperor of Byzantium, Nicephoras II Phocas, to send him a mosaicist capable of imitating the superb mosaics of the Great Mosque of Damascus, one of the great 8th-century Syrian Umayyad buildings. The Christian emperor sent the Muslim caliph not only a mosaicist but also a gift of 1600kg of gold mosaic cubes. Shaped into flower motifs and inscriptions from the Quran, this gold is what gives the mihrab portal its magical glitter. Inside the mihrab, a single block of white marble sculpted into the shape of a scallop shell, a symbol of the Quran, forms the dome that amplified the voice of the imam throughout the mosque.

The arches of the maksura are the mosque’s most intricate and sophisticated, forming a forest of interwoven horseshoe shapes. Equally attractive are the maksura’s skylit domes, decorated with star-patterned stone vaulting. Each dome is held up by four interlocking pairs of parallel ribs, a highly advanced technique for 10th-century Europe.

Following the Christian conquest of Córdoba in 1236, the Mezquita was used as a cathedral but remained largely unaltered for nearly three centuries. But in the 16th century King Carlos I gave the cathedral authorities permission to rip out the centre of the Mezquita in order to construct a new Capilla Mayor (main altar area) and coro (choir).

Legend has it that when the king saw the result he was horrified, exclaiming that the builders had destroyed something unique in the world. The cathedral took nearly 250 years to complete (1523–1766) and thus exhibits a range of architectural fashions, from plateresque and late Renaissance to extravagant Spanish baroque. Among the later features are the Capilla Mayor's rich 17th-century jasper and red-marble retable (altar screen), and the fine mahogany stalls in the choir, carved in the 18th century by Pedro Duque Cornejo.

A one-hour sound-and-light show (www.elalmadecordoba.com), in nine languages via audio guides, is presented in the Mezquita twice nightly except Sundays from March to October, and on Friday and Saturday from November to February. Tickets are €18 (senior or student €9).