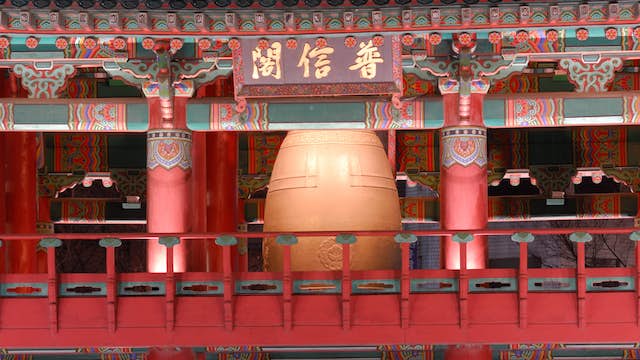 Contrasting with the modern Jongno Tower opposite, this ornate pavilion houses a recent copy of the city bell – the original, forged in 1468, is in the garden of the National Museum of Korea. Costumed guardsmen patrol around the bell and ring it 12 times at noon (the ceremony runs from 11.20am to 12.20pm Tuesday to Sunday).

In the past the great bell was struck 28 times every night at 10pm to ask the heavens for a peaceful night and to signal the closure of the gates and the start of the nightly curfew. To signal the start of the new day it was struck 33 times for the 33 Buddhist heavens at 4am, after which the gates were reopened. It also sounded when fire broke out, as often happened with so many wooden and thatched buildings.