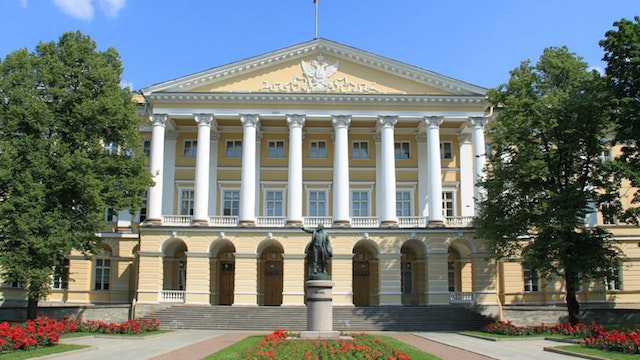 Built by Giacomo Quarenghi between 1806 and 1808 as a school for aristocratic girls, the Smolny Institute was thrust into the limelight in 1917 when it became the headquarters for the Bolshevik Central Committee and the Petrograd Soviet. From here, Trotsky and Lenin directed the October Revolution, and in the Hall of Acts (Aktovy zal) on 25 October, the All-Russian Congress of Soviets conferred power on a Bolshevik government led by Lenin.

The Smolny Institute served as the seat of Soviet power until March 1918, when the capital was relocated to Moscow. In 1934, the powerful Leningrad Party chief Sergei Kirov was assassinated in its corridors, on orders from Stalin, ridding the Soviet leader of a perceived rival and simultaneously providing the perfect pretext for the notorious Leningrad purges. Today St Petersburg’s governor continues to run the city from here. Although it's closed to the public, some of the big tour companies, such as SPB Tours (www.spb-tours.com), include a short visit inside the Smolny Institute on multiday tours around St Petersburg.