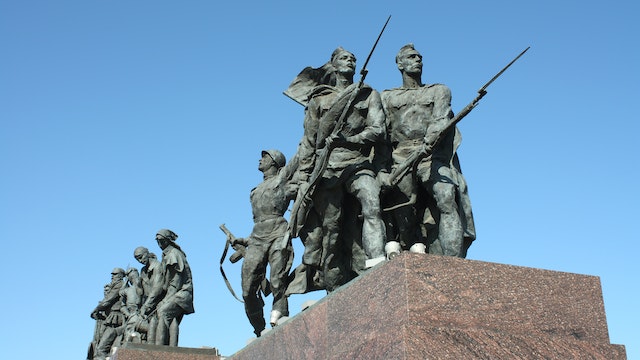 Due south of the House of Soviets, on Moskovsky pr is this awe-inspiring monument. Centred around a 48m-high obelisk, the monument, unveiled in 1975, is a sculptural ensemble of bronze statues symbolising the city’s encirclement and eventual victory in WWII. On a lower level, a second bronze ring 40m in diameter surrounds a very moving sculpture standing in the centre. Haunting symphonic music creates a sombre atmosphere to guide you downstairs to the underground exhibition in a huge, mausoleum-like interior.

Here, the glow of 900 bronze lamps creates an eeriness matched by the sound of a metronome (the only sound heard by Leningraders on their radios throughout the war save for emergency announcements), showing that the city’s heart was still beating. Twelve thematically assembled showcases feature items from the war and siege. An electrified relief map in the centre of the room shows the shifting front lines of the war.