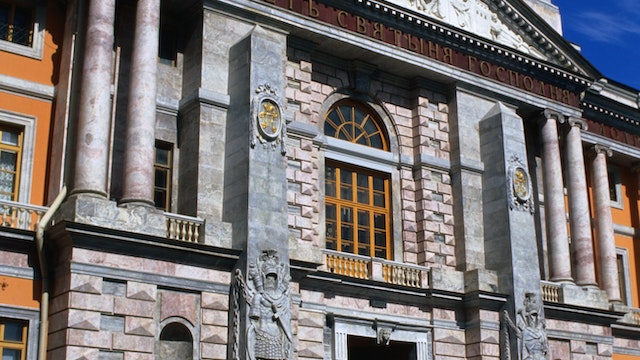 A branch of the Russian Museum, the castle is worth visiting for its temporary exhibits as well as a few finely restored state rooms, including the lavish burgundy and gilt throne room of Tsar Paul I’s wife Maria Fyodorovna.

Rastrelli’s original fairytale wooden palace for Empress Elizabeth was knocked down in the 1790s to make way for this bulky edifice, a bizarre take on a medieval castle, quite unlike any other building in the city.

The son of Catherine the Great, Tsar Paul I, was born in the wooden palace and he wanted his own residence on the same spot. He specified a defensive moat as he (quite rightly) feared assassination. But this erratic, cruel tsar only got 40 days in his new abode before he was suffocated in his bedroom in 1801.

In 1823 the palace became a military engineering school (hence its Soviet-era name, Engineer’s Castle, or Inzhenerny Zamok), whose most famous pupil was Fyodor Dostoevsky.