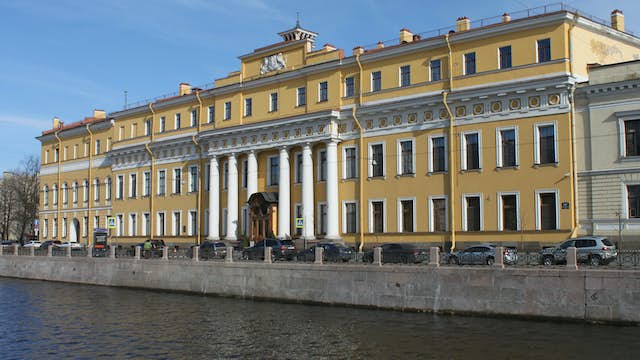 This spectacular palace on the Moyka River has some of the best 19th-century interiors in the city, in addition to a fascinating and gruesome history. The palace’s last owner was the eccentric Prince Felix Yusupov, a high-society darling and at one time the richest man in Russia. Most notoriously, the palace is the place where Grigory Rasputin was murdered in 1916, and the basement where this now infamous plot unravelled can be visited as part of a guided tour.

The palace was built by Vallin de la Mothe in the 1770s, but the current interiors date from a century later, when it became the residence of the illustrious Yusupov family. The palace interiors are sumptuous and rich, with many halls painted in different styles and decked out with gilded chandeliers, silks, frescoes, tapestries and some fantastic furniture.

Your visit begins on the 2nd floor, which features an amazing ballroom (the White Column Room), banquet hall, the delightful Green Drawing Room and the ornate rococo private theatre. The tour continues on the ground floor, where you will see the fabulous Turkish Study (used by Felix as a billiards room), the Prince's study and the Moorish Drawing Room, among many other rooms.

If you want to see the room where Rasputin’s murder began (he was poisoned and shot to no avail, finally succumbing to drowning) you have to pay for an extra 90-minute tour, which takes place at 5pm daily. There are limited tickets available each day, so come in good time to secure a place.