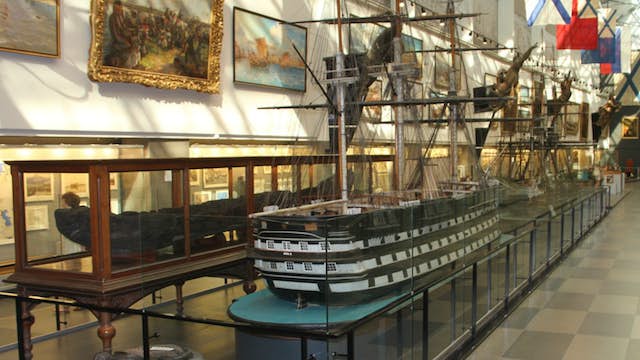 Following a move to this beautifully repurposed building opposite the former shipyard of New Holland, the Central Naval Museum has moved into the 21st century and is now one of St Petersburg's best history museums. The superb, light-bathed building houses an enormous collection of models, paintings and other artefacts from three centuries of Russian naval history, including botik, the small boat known as the 'grandfather of the Russian navy' – stumbling across it in the late 17th century was Peter the Great's inspiration to create a Russian maritime force.

The real attraction here is the superb collection of model boats, some of which are simply extraordinary in size and detail. There's sadly little signage in English, so it's worthwhile paying extra for an audio guide (R600 to R800) if you're interested in really understanding what you're seeing. The entrance to the museum is opposite New Holland on nab Kryukova kanala.