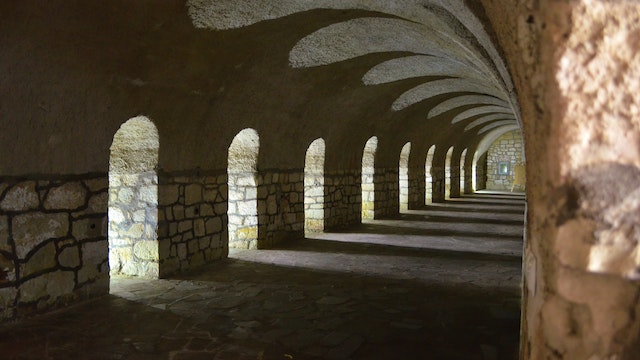 This mighty fortification, begun under Austrian rule in the mid-17th century on the site of former strongholds dating to the 10th century, was extended and modernised over the following 200 years. Today it covers 17 hectares, making it the largest and best-preserved fortification of its kind in Poland. The walls in the lower parts measure up to 11m thick, and taper to never less than 4m.

The entrance is up the hill north of the town’s central Rynek.

On entering, you can wander around various pathways and chambers and go to the top of the fortress for a bird’s-eye view of town. There are several exhibitions in the grounds, including a lapidarium containing old stone sculptures (mostly tombstones) collected from historical buildings around the region.

However, the real attraction here is the extensive network of defensive tunnels. Guided 40-minute tours of this so-called labyrinth begin on the hour, taking you on a 1km circuit including some passageways that are so low you have to bend over. The temperature ranges from 6°C to 8°C and the humidity is very high.

Altogether 40km of tunnels were drilled around the fortress; they served two purposes. Those under the fortifications were principally for communication, shelter and storage, while the others, running up to 500m away from the fortress, were designed to attack and destroy enemy artillery. The tunnels were divided into sectors and stuffed with gunpowder; when the enemy happened to move their guns into a particular sector, the relevant chamber could be blown up. This bizarre minefield was initiated in 1743 by a Dutch engineer, and by 1807 an immense labyrinth of tunnels had been built. The system was never actually used – at least not here.