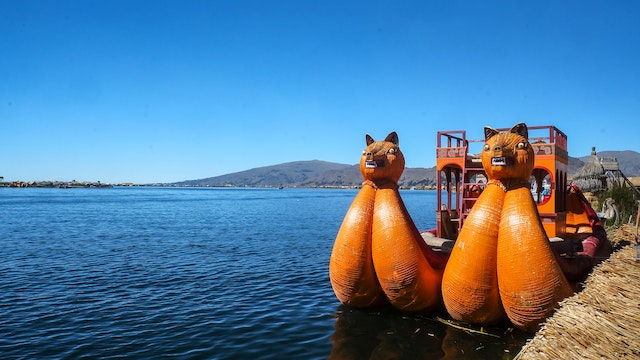 Of the small remote islands dotted around Lake Titicaca, Isla Amantaní is the least visited. Its population is just 4000, is a few kilometers north of the smaller Isla Taquile and many tours day trip through the region without continuing to Amantaní. Still, a stay here is unforgettable, and it's well worth making your way to this remote corner of Peru. Almost all trips to Amantaní involve an overnight homestay with islanders, giving you a privileged glimpse into the local way of life.

The island is very quiet, with no roads or vehicles – you won't even see a dog, as they aren't allowed. Isla Amantaní boasts lovely views, too. Several hills are topped by ruins, among the highest and best-known of which are Pachamama (Mother Earth) and Pachatata (Father Earth). These date to the Tiwanaku period, named for a largely Bolivian culture that appeared around Lake Titicaca and expanded rapidly between 200 BC and AD 1000.

When you arrive, Amantaní Community Lodging – which is essentially made of the island families – will allocate you to your accommodations according to a rotating system. Please respect this process, even if you are with a guided group. There’s no problem with asking for families or friends to be together. All visitors eat at their homestay, and the meals typically include island staples like fish and quinoa. There are small stores for snacks, too, however.

As with Taquile, the islanders speak Quechua, but their culture is more heavily influenced by the Aymara. The villagers sometimes organize rousing traditional dances, letting travelers dress in their traditional party gear to dance the night away – though, of course, your hiking boots might ultimately give you away. Don’t forget to look up at the incredibly starry night sky as you make your way back to your hosts' home.

Getting to Isla Amantaní

Ferries (round-trip S30; admission to island S8) leave from the Puno port for Amantaní at 8:30am every day. There are departures from Amantaní to Taquile and Puno around 4pm every day – check, though, as times vary – and sometimes from Amantaní to Puno at around 8am, depending on demand. A private boat taxi between Llachón and Amantaní costs S100 return.