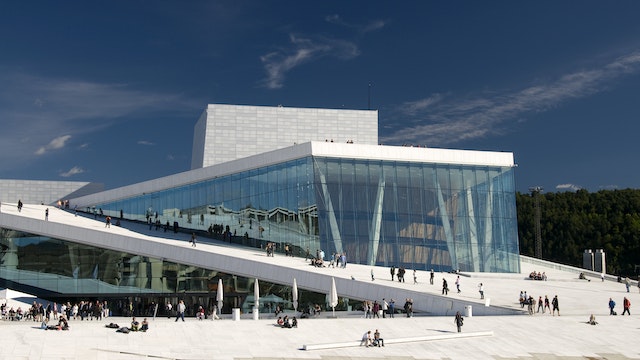 Centrepiece of Oslo's rapidly developing waterfront, the magnificent Opera House (2008), reminiscent of a glacier floating in the waters of the Oslofjord, is considered one of the most iconic buildings in Scandinavia. Conceived by Oslo-based architectural firm Snøhetta, its design is a thoughtful meditation on the notion of monumentality, the dignity of cultural production, Norway's unique place in the world and the conversation between public life and personal experience. To fully appreciate the building's interior, join one of the guided tours.

It's worth spending some time here, but if you don't have long, make sure you tackle the roof, a broad luminous 'carpet' of marble patchwork (all 36,000 blocks of it), wonderful views of the city included. It's one of those architectural experiences that's worth far more than the sum of its parts.

While wandering around the building, it can be easy to forget that it's not just there to serve as eye candy for tourists, and that its prime role is to act as a showcase for top-notch opera and ballet performances. Upcoming performances are listed on the website and ticket prices vary from 100kr to 745kr.