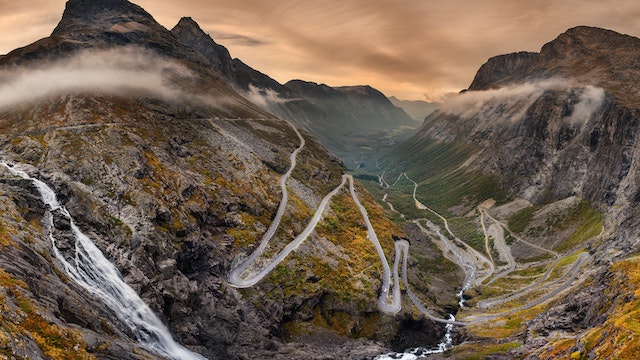 This twisting, sky-topping corkscrew of a road is the most famous stretch of tarmac in Norway. Completed in 1936 after eight years of labour, the Troll's Ladder is a stunning feat of road building, spiralling up the mountainside through 11 hairpin bends and a 1:12 gradient, and after heavy rain, waterfalls cascade down the mountainside, drenching cars as they pass. To add to the thrill, much of it is effectively single-lane, meaning traffic jams and passing vehicles are part of the hair-raising experience.

At the crest of the pass, a gravity-defying platform and a series of viewpoints have been built out of rusting steel and concrete, a striking artificial counterpoint to the bare rock and natural scenery all around. Teetering precipitously over the plunging cliff and allowing stomach-churning views right down the mountain, the site was designed by top architect Reiulf Ramstad and has become one of the most famous locations on the National Tourist Route network: don't miss it.

The road can be done in either direction, from Valldal or Andalsnes, a distance of about 38km. The road passes through Reinheimen National Park, established in 2006 and Norway's third largest, where wild reindeer still crop the mosses and soft grass.

The pass is usually cleared and open from late May to mid-October, although it's entirely dependent on the seasonal snowfall.