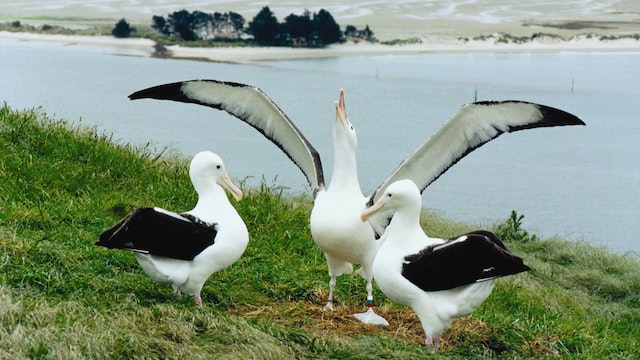 Taiaroa Head (Pukekura), at the peninsula’s northern tip, has the world’s only mainland royal albatross colony, along with a late 19th-century military fort. The only public access to the area is by guided tour. There's an hour-long albatross tour and a 30-minute fort tour available, or the two can also be combined. Otherwise you can just call into the centre to look at the displays and have a bite in the cafe.

Albatross are present on Taiaroa Head throughout the year, but the best time to see them is from December to March, when one parent is constantly guarding the young while the other delivers food throughout the day. Sightings are most common in the afternoon when the winds pick up; calm days don’t see as many birds in flight.

Little penguins swim ashore at Pilots Beach (just below the car park) around dusk to head to their nests in the dunes. For their protection, the beach is closed to the public every evening one hour before sunset, but viewing is possible from a specially constructed wooden platform (adult/child $35/10). Depending on the time of year, 50 to 200 penguins might waddle past. Photos are allowed, but no flashes.

Fort Taiaroa was built in 1885 in response to a perceived threat of Russian invasion. Its Armstrong Disappearing Gun was designed to be loaded and aimed underground, then popped up like the world’s slowest jack-in-the-box to be fired.