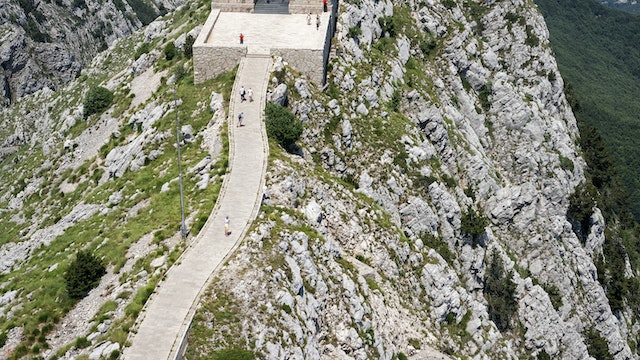 Lovćen’s star attraction, this magnificent mausoleum (built 1970 to 1974) sits at the top of its second-highest peak, Jezerski Vrh (1657m). Take the 461 steps up to the entry where two granite giantesses guard the tomb of Montenegro’s greatest hero. Inside, under a golden mosaic canopy, a 28-tonne Petar II Petrović Njegoš rests in the wings of an eagle, carved from a single block of black granite.

The actual tomb lies below, and a path at the rear leads to a dramatic circular viewing platform providing the same utterly spectacular views that caused George Bernard Shaw to exclaim, ‘Am I in paradise or on the moon?’.

A photographer stationed near the entrance has a stash of folk costumes and a computer set up to print out quirky souvenirs (€10).