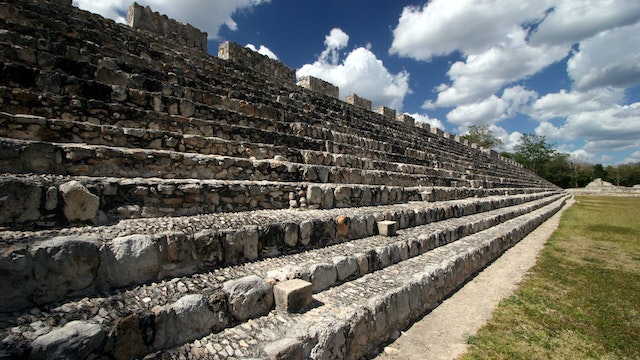 Edzná’s massive complexes, that once covered more than 17 sq km, were built by a highly stratified society that flourished from about 600 BC to the 15th century AD. During that period the people of Edzná built more than 20 complexes in a melange of architectural styles, installing an ingenious network of water-collection and irrigation systems. (Though it’s a long way from such Puuc Hills sites as Uxmal and Kabah, some of the architecture here has elements of the Puuc style.)

Most of the visible carvings date from AD 550 to 810. The causes leading to Edzná’s decline and gradual abandonment remain a mystery; the site remained unknown until its rediscovery by campesinos in 1906.

Edzná means ‘House of the Itzáes,’ a reference to a predominant governing clan of Chontal Maya origin. Edzná’s rulers recorded significant events on stone stelae. Around 30 stelae have been discovered adorning the site’s principal temples; a handful are on display underneath a palapa just beyond the ticket office.

A path from the palapa leads about 400m through vegetation; follow the 'Gran Acropolis' sign. Soon, to your left, you'll come upon the Plataforma de los Cuchillos (Platform of the Knives), a residential complex highlighted by Puuc architectural features. The name is derived from an offering of silica knives that was found within.

Crossing a sacbé (stone-lined, grass walkway), you arrive at the main attraction, the Plaza Principal. Measuring 160m long and 100m wide, the Plaza Principal is surrounded by temples. On your right is the Nohochná (Big House), a massive, elongated structure topped by four long halls likely used for administrative tasks, such as the collection of tributes and the dispensation of justice.

Across the plaza is the Gran Acrópolis, a raised platform holding several structures, including Edzná’s major temple, the 31m-high Edificio de los Cinco Pisos (Five-Story Building). The current structure is the last of four remodels and was done primarily in the Puuc style. It rises five levels from its base to the roofcomb and contains many vaulted rooms. Note the well-preserved glyphs along the base of the central staircase.

South of Plaza Principal is the Templo de los Mascarones (Temple of the Masks), with a pair of reddish stucco masks underneath a protective palapa. Personifying the gods of the rising and setting sun, these extraordinarily well-preserved faces display dental mutilation, crossed eyes and huge earrings, features associated with the Maya aristocracy.