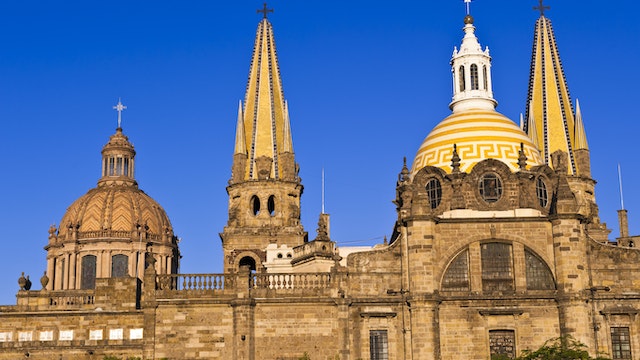 Guadalajara’s cathedral is the city’s most conspicuous landmark with distinctive neo-Gothic towers built after an earthquake toppled the originals in 1818. Begun in 1561 and consecrated in 1618, the building is almost as old as the city itself. Time your visit right and you’ll see light filter through stained-glass of the Last Supper above the altar and hear a working pipe organ rumble sweetly from the rafters.

The interior includes a Gothic crypt, where three archbishops are buried, plus massive Tuscan-style gold-leaf pillars and 11 richly decorated side altars that were bequeathed to the city by King Fernando VII of Spain (1784–1833). The 18th-century glass case nearest the west entrance is an extremely popular reliquary, containing the waxed remains of the martyred Santa Inocencia. In the sacristy, which an attendant can open for you on request, is La Asunción de la Virgen, painted by Spanish artist Bartolomé Murillo in 1650. Much like the city's Palacio de Gobierno, the cathedral is a bit of a stylistic hodgepodge, including baroque, Churrigueresque (late Spanish baroque) and neoclassical influences.