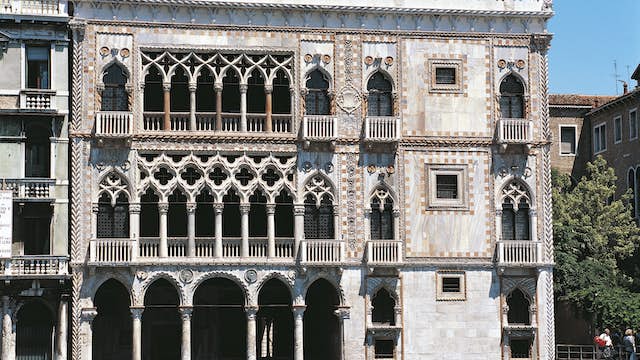 One of the most beautiful buildings on the Grand Canal, with a lacy Gothic facade, 15th-century Ca’ d’Oro is resplendent even without the original gold-leaf details that gave the palace its name (Golden House). Baron Franchetti (1865–1922) bequeathed this treasure-box palace to Venice, packed with his collection of masterpieces, many of which were originally plundered from Veneto churches during Napoleon’s conquest of Italy. The baron's ashes are interred beneath an ancient purple porphyry column in the magnificent open-sided, mosaic-floored court downstairs.

Napoleon had excellent taste in souvenirs, including bronzes, tapestries, paintings and sculpture ripped (sometimes literally) from church altars. Most were warehoused at Milan’s Brera Museum as Napoleonic war trophies until they were reclaimed by Venice for display here. Collection highlights include (when she's not touring the world) Titian's flushed, smouldering Venus with a Mirror (c 1550) and Mantegna's arrow-riddled St Sebastian (1490). There are also more depictions of the Madonna and Child than seems entirely reasonable.

A combined ticket (adult/reduced €13/6.50) that includes the Palazzo Grimani is available. Admission is free on the first Sunday of each month.