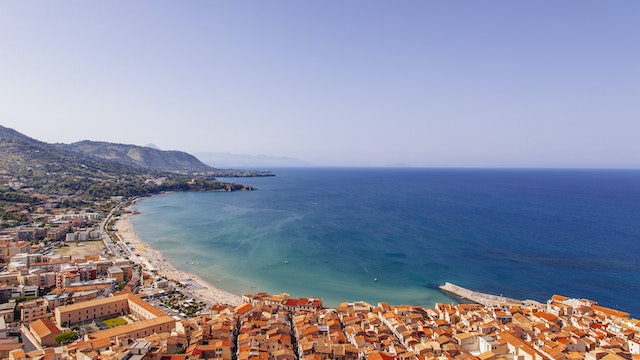 Cefalù's cathedral is one of the jewels in Sicily's Arab-Norman crown, only equalled in magnificence by the Cattedrale di Monreale and Palermo's Cappella Palatina. Filling the central apse, a towering figure of Cristo Pantocratore (Christ All Powerful) is the focal point of the elaborate Byzantine mosaics – Sicily's oldest and best preserved, predating those of Monreale by 20 or 30 years.

In his hand, a compassionate-looking Christ holds an open Bible bearing a Latin and Greek inscription. Other mosaic groups include the Virgin with Four Archangels dressed as Byzantine officials.

The 16 interior columns with Roman capitals probably came from the Tempio di Diana on La Rocca.

Legend tells us that the cathedral was built by Roger II in the 12th century to fulfil a vow to God after his fleet was saved during a violent storm off Cefalù. In fact, it was more likely the result of Roger's tempestuous relationship with the Palermitan archbishopric. Eager to curb the growing influence of the papacy in Sicily (with whom the Palermo archbishopric had close ties), Roger thought that building a mighty church so far from Palermo would prove an effective reminder of his power across the island and pose a disincentive to any potential usurpers. It's thus hardly surprising that the cathedral's architecture is distinctly fortress-like.

You can enjoy the view of the cathedral's soaring twin pyramid towers, framed by La Rocca, over a morning coffee or evening aperitivo in the Piazza del Duomo. Better yet, climb the towers themselves for lofty perspectives over the town, the cathedral's interior and the sparkling Tyrrhenian Sea. In 2019 the towers were opened to the public for the first time; to enter, buy a special €5 ticket at the door, which also grants access to close-up views of the famous Cristo Pantocratore mosaic from a privileged position within the apse.

A separate €5 ticket grants access to the cathedral's treasury and cloisters. The treasury houses a wide array of ecclesiastical vestments and ornate metalwork, while the cloisters are noteworthy for their ancient columns supporting graceful Arab-Norman arches. The finely carved capitals depict a mix of religious and secular images – among the most interesting are the depictions of acrobats, a pair of crocodiles and Noah's Ark.