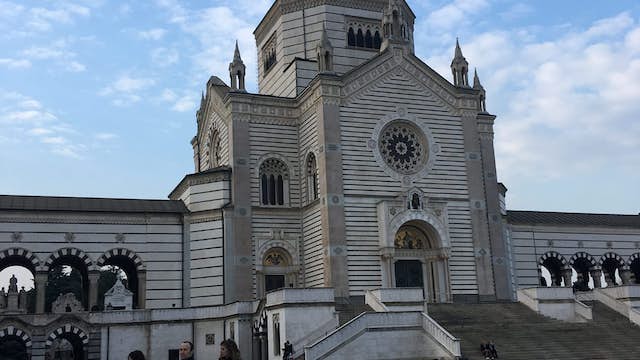 Behind striking Renaissance-revival black-and-white walls, Milan’s wealthy have kept their dynastic ambitions alive long after death with grand sculptural gestures since 1866. Nineteenth-century death-and-the-maiden eroticism gives way to some fabulous abstract forms from mid-century masters. Studio BBPR’s geometric steel-and-marble memorial to Milan’s WWII concentration-camp dead sits in the centre, stark and moving. The tombs are divided into three zones: Catholics lie centre stage, while people of Jewish descent rest on the right and non-Catholics on the left. Grab a map inside the forecourt.

Enter through the Famedio (Temple of Fame), originally designed as a church but now a sepulchre for the city's great and good. Inside, directly beneath the star-studded lapis dome, is the sarcophagus of novelist and father of Italian letters Alessandro Manzoni, while Milan's most famous artist and footballer, Francesco Hayez and Giuseppe Meazza, can both be found in the crypt below.

The bijou Doric temple that houses the now-closed crematorium opened in 1876, thanks to a donation by industrialist Albert Keller, and was the first in Italy. It aimed to solve the problem of the relentless expansion of the burial grounds and was only possible due to the 19th-century's emerging scientific enlightenment, the practice having largely died out in Europe with the advent of Christianity and its focus on resurrection. Its neoclassical style is a nod to the ancient world when cremation was common and you'll still find the very first 19th-century urns in situ in its alcoves.