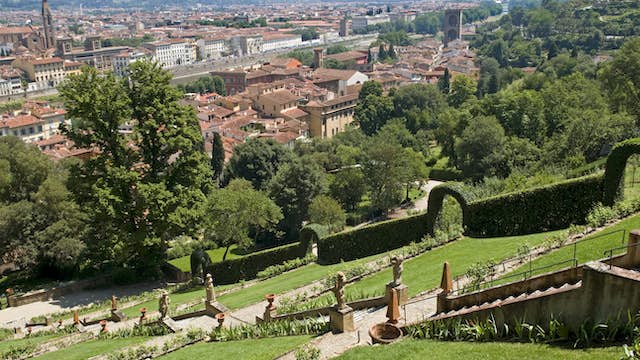 This 17th-century villa and garden was named after 19th-century antiquarian art collector Stefano Bardini (1836–1922), who bought it in 1913 and restored its ornamental medieval garden. It has all the features of a quintessential Tuscan garden, including artificial grottoes, orangery, marble statues and fountains. Inside the villa, the small Museo Pietro Annigoni displays works by Italian painter Pietro Annigoni (1910–88). End with city views from the romantic roof terrace.

April and May, with the garden's flower beds of azaleas, peonies and wisteria in bloom, are lovely months to visit, as is June with its flowering irises. Its Michelin-starred garden restaurant, La Leggenda dei Frati, with stone loggia overlooking the Florentine skyline, is one of the most romantic spots in the city to dine.