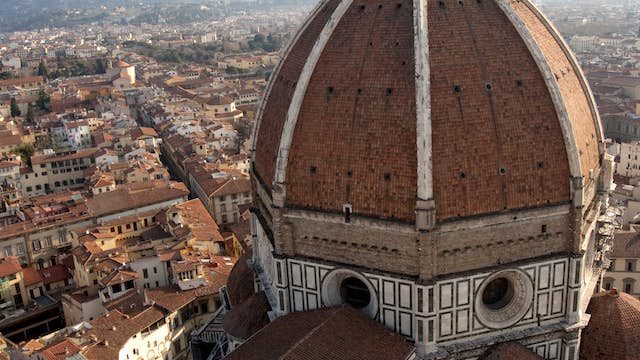 Florence's duomo is the city's most iconic landmark. Capped by Filippo Brunelleschi's red-tiled cupola, it's a staggering construction whose breathtaking pink, white and green marble facade and graceful campanile dominate the Renaissance cityscape. Sienese architect Arnolfo di Cambio began work on it in 1296, but construction took almost 150 years and it wasn't consecrated until 1436. In the echoing interior, look out for frescoes by Vasari and Zuccari and up to 44 stained-glass windows.

The duomo's neo-Gothic facade was designed in the 19th century by architect Emilio de Fabris to replace the uncompleted original, torn down in the 16th century. The oldest and most clearly Gothic part of the cathedral is its south flank, pierced by the Porta dei Canonici (Canons' Door), a mid-14th-century High Gothic creation (you enter here to climb up inside the dome).

After the visual wham-bam of the facade, the sparse decoration of the cathedral's vast interior, 155m long and 90m wide, comes as a surprise – most of its artistic treasures have been removed over the centuries according to the vagaries of ecclesiastical fashion, and many are on show in the Museo dell’Opera del Duomo. The interior is also unexpectedly secular in places (a reflection of the sizeable chunk of the cathedral not paid for by the church): down the left aisle two immense frescoes of equestrian statues portray two condottieri (mercenaries) – on the left Niccolò da Tolentino by Andrea del Castagno (1456), and on the right Sir John Hawkwood (who fought in the service of Florence in the 14th century) by Uccello (1436).

Between the left (north) arm of the transept and the apse is the Sagrestia delle Messe (Mass Sacristy), its panelling a marvel of inlaid wood carved by Benedetto and Giuliano da Maiano. The fine bronze doors were executed by Luca della Robbia – his only known work in the material. Above the doorway is his glazed terracotta Resurrezione (Resurrection). Visit it only by guided tour.

A stairway near the main entrance of the cathedral leads down to the gift shop and Cripta Santa Reparata, where excavations between 1965 and 1974 unearthed parts of the 5th-century Chiesa di Santa Reparata that originally stood on the site. Should you be visiting on Sunday (when the crypt is closed), know your combined duomo ticket is valid 72 hours.