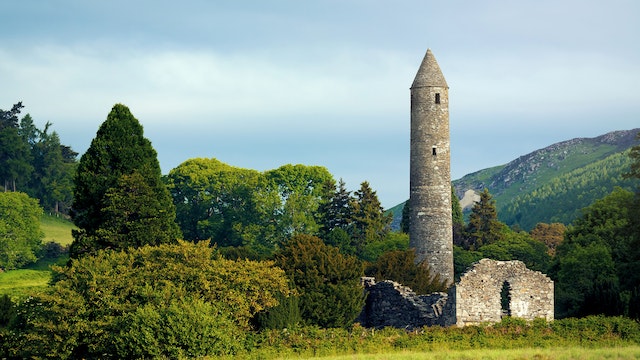 Nestled between two lakes, haunting Glendalough (Gleann dá Loch, meaning 'Valley of the Two Lakes') is one of the most significant monastic sites in Ireland and one of the loveliest spots in the country, centred on a 1000-year-old Round Tower, a ruined cathedral and a tiny church known as St Kevin's Kitchen. It was founded in the late 5th century by St Kevin, a bishop who established a monastery on the Upper Lake's southern shore and about whom there is much folklore.

During the Middle Ages, when Ireland was known as 'the island of saints and scholars', Glendalough became a monastic city catering to thousands of students and teachers. The site is entered through the only surviving monastic gateway in Ireland.

The Glendalough Visitor Centre, opposite the Lower Lake car park, has historical displays and a good 20-minute audiovisual show. From the Upper Lake (1.5km west of the visitor centre), several good hiking trails head into the hills.

Visitors swarm to Glendalough in summer, so it's best to arrive early and/or stay late, preferably on a weekday, as the site is free and open 24 hours. The lower car park gates are locked when the visitor centre closes.