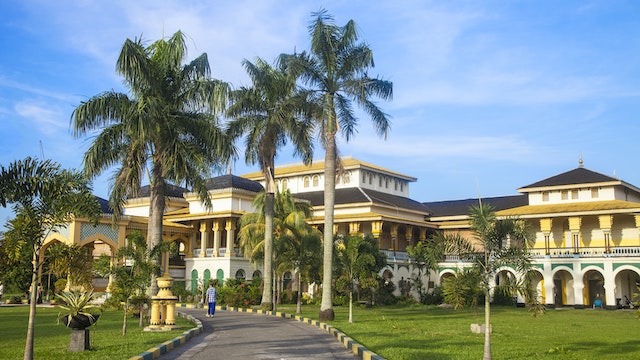 The grand, 30-room Maimoon Palace was built by the Sultan of Deli in 1888 and features Malay, Mughal and Italian influences. Only the main room, which features the lavish inauguration throne, is open to the public. Traditional music performances usually take place at 10am and 2pm Monday to Friday, and at 2pm on Saturday and Sunday.

Here you can check out a modest keris (ornamental dagger) collection and dress up in traditional Malay costume for a photo (20,000Rp).

The back wing of the palace is occupied by members of the sultan’s family. The current sultan, Aria Mahmud Lamanjiji, was only eight years old when he was installed as the 14th Sultan of Deli in 2005 (the youngest sultan in Deli history), replacing his father, who died in a plane crash. He now resides in Sulawesi with his mother, and his role is solely ceremonial.