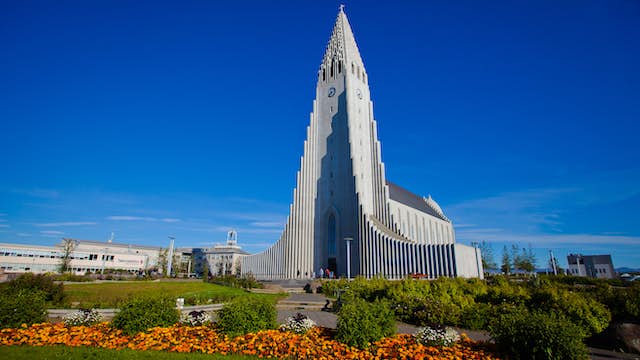 Reykjavík’s immense white-concrete church (1945–86), star of a thousand postcards, dominates the skyline and is visible from up to 20km away. An elevator trip up the 74.5m-high tower reveals an unmissable view of the city. In contrast to the high drama outside, the Lutheran church’s interior is quite plain. The most eye-catching feature is the vast 5275-pipe organ installed in 1992. The church’s size and radical design caused controversy, and its architect, Guðjón Samúelsson (1887–1950), never saw its completion.

The columns on either side of the tower represent volcanic basalt, part of Samúelsson's desire to create a national architectural style. At the front, gazing proudly into the distance, is a statue of the Viking Leifur Eiríksson, the first European to discover America. Designed by Alexander Stirling Calder (1870–1945), it was a present from the US on the 1000th anniversary of the Alþingi (Parliament) in 1930.

From mid-June to late August, hear half-hour choir concerts (www.scholacantorum.is; 2500kr) at noon on Wednesday and organ recitals (www.listvinafelag.is) at noon on Thursday and Saturday (2000kr), and for one hour at 5pm on Sunday (2500kr). Services are held on Sunday at 11am, with a small service Wednesday at 8am. There is an English service the last Sunday of the month at 2pm.