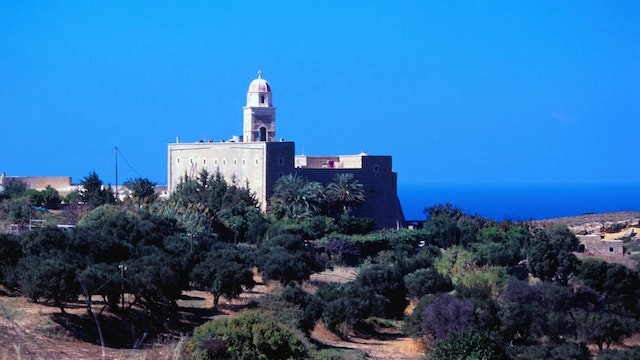 In splendid isolation on a windswept plateau, 15th-century fortified Moni Toplou is one of the most historically significant monasteries in Crete. Its defences were tested by everyone from pirates to crusading knights to the Turks. The church brims with superb icons, although the main magnet is the intricate Lord Thou Art Great icon by celebrated Cretan artist Ioannis Kornaros. It depicts scenes from the Old and New Testaments, including Noah’s Ark, Jonah and the Whale, and Moses parting the Red Sea.

The name Toplou is derived from the Turkish word for cannon, which is what the monks used to defend themselves against pirates during Venetian times. The monastery was also repeatedly active in the cause of Cretan independence. Under the Turkish occupation a secret school operated on the premises, while during WWII resistance leaders ran an underground radio transmitter here. A small exhibit in the museum recalls this period with rifles, helmets and a field telephone. The adjacent main room displays engravings and icons.

Today the monastery is not only an attraction for fans of history, religion, art and architecture but also the largest landowner in the area and an active producer of award-winning wine and olive oil, which you can sample in a nearby tasting room (open 10.30am to 5pm Monday to Saturday).

Moni Toplou is about 15km east of Sitia. Buses can drop you at the junction of the Sitia–Palekastro road, from where you'll need to hitch or walk for 3.5km.