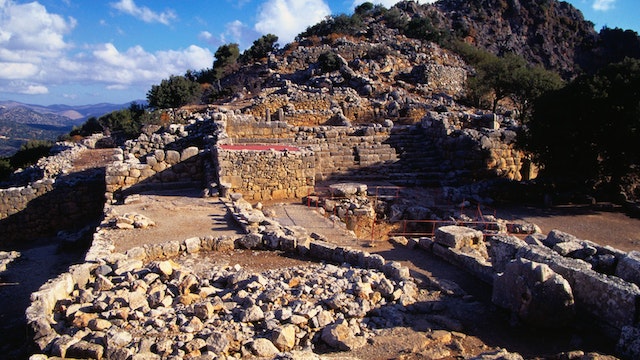 The fortified hilltop city state of Lato is one of Crete’s best-preserved non-Minoan ancient sites and worth the trip for the rural serenity and stunning views down to the Bay of Mirabello alone. Founded by the Dorians in the 7th century BC, Lato reached its heyday in the 3rd century BC but was gradually abandoned. By the 2nd century AD its administrative centre had moved to its port in present-day Agios Nikolaos.

About 100m past the ticket gate, you enter the site via the city gate, from where a long, stepped street leads up to the agora (marketplace) past a wall with two towers, residences, and buildings that housed shops and workshops. At the top of the steps, as you approach the agora, you'll first come upon vestiges of a stoa (colonnaded portico). Immediately behind it is a rectangular temple where numerous 6th-century-BC figurines were unearthed. The deep hole to the left of the temple was Lato's public cistern. Behind it, a monumental staircase leads up to the prytaneion (administrative centre). At its centre, a hearth that burnt 24/7 was surrounded by stepped benches where the city leaders held their meetings.

South of the agora, climb up the slope to a terrace with another sanctuary fronted by a three-stepped altar. Views of the entire site are fabulous from here. Down below to your right (east) you can spot a theatral area that could seat about 350 spectators on stone benches cut into the rock and on an exedra (open portico with seats).

Nearchus, an admiral under Alexander the Great, is believed to hail from Lato, whose name derives from the goddess Leto. Legend has it that Leto's union with Zeus produced Artemis and Apollo.

There are no buses to Lato. The nearest stop is in Kritsa, from where it's a 3km walk north. The site is off the Kritsa–Lakonion Rd.