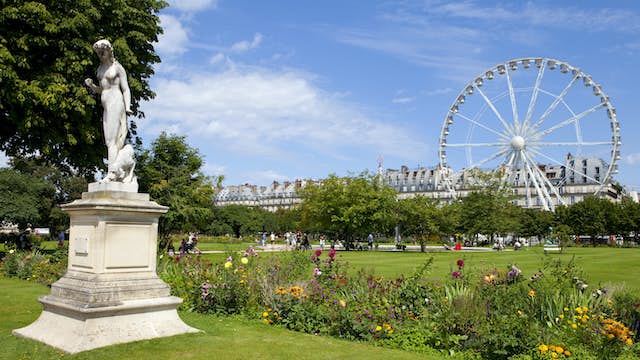 Filled with fountains, ponds and sculptures, the formal 28-hectare Tuileries Garden, which begins just west of the Jardin du Carrousel, was laid out in its present form in 1664 by André Le Nôtre, architect of the gardens at Versailles. The Tuileries soon became the most fashionable spot in Paris for parading about in one’s finery. It now forms part of the Banks of the Seine Unesco World Heritage site and is one of Paris’ best parks.

The 16th-century Palais des Tuileries (home to Napoléon, among others) stood at the garden’s western end until 1871, when it was razed during the upheaval of the Paris Commune. All that remains of the palace today are two buildings, both museums.

The axe historique (historic axis), the western continuation of the Tuileries’ east–west axis, follows the av des Champs-Élysées to the Arc de Triomphe and, ultimately, to the Grande Arche in the skyscraper district of La Défense.

Museums in the Jardin des Tuileries

At the far western end of the gardens are two museums, the Musée de l'Orangerie and the Jeu de Paume.

The Musée de l'Orangerie, set in a 19th-century edifice built to shelter the garden’s orange trees in winter, is a treat. The two oval rooms of the purpose-built top floor are the show-stealer; here you'll find eight of Monet's enormous, ethereal Water Lilies canvases bathed in natural light.

The other museum is the wonderfully airy Jeu de Paume, set in the palace’s erstwhile royal tennis court. It stages innovative photography exhibitions.

Entry is free. Opening hours vary: the parks is open from 7am to 11pm June through August; 7am to 9pm April, May and September; and 7.30am to 7.30pm October through March.

The summer funfair Fête des Tuileries runs from June through August, when over 60 attractions, including bumper cars and a hall of mirrors, set up in the gardens.

The Jardins des Tuileries is a popular spot to go jogging if you're staying on the Right Bank, but it can get crowded during the day so make sure to get out early in the morning.