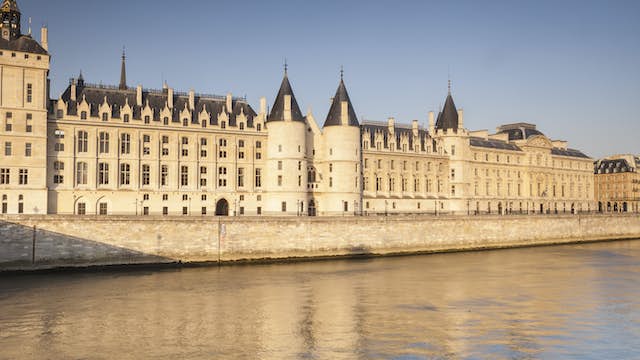 A royal palace in the 14th century, the Conciergerie later became a prison. During the Reign of Terror (1793–94) alleged enemies of the Revolution were incarcerated here before being brought before the Revolutionary Tribunal next door in the 13th-century Palais de Justice. Top-billing exhibitions take place in the beautiful, Rayonnant Gothic Salle des Gens d’Armes, Europe’s largest surviving medieval hall.

Of the almost 2800 prisoners held in the dungeons during the Reign of Terror (in various ‘classes’ of cells, no less) before being sent in tumbrels to the guillotine, the star prisoner was Queen Marie-Antoinette – you can see a reproduction of her cell. As the Revolution began to turn on its own, radicals Danton and Robespierre made an appearance at the Conciergerie and, finally, the judges of the tribunal themselves.

To get the most out of your visit, rent a HistoPad (a tablet-device guide; €5) to explore the Conciergerie in augmented reality and take part in an interactive, 3D treasure hunt.