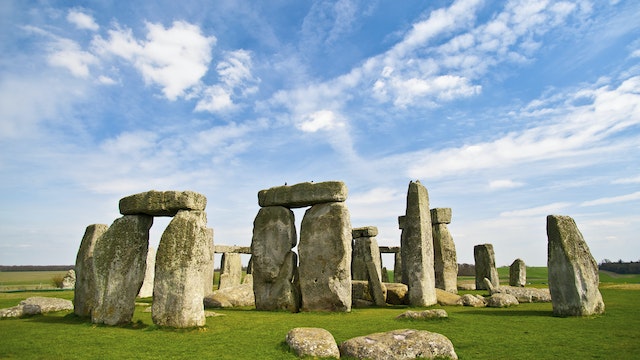 An ultramodern makeover at ancient Stonehenge has brought an impressive visitor centre and the closure of an intrusive road (now restored to grassland). The result is a strong sense of historical context, with dignity and mystery returned to an archaeological gem.

A pathway frames the ring of massive stones. Although you can't walk in the circle, unless on a recommended Stone Circle Experience tour, you can get fairly close. Admission is through timed tickets – secure a place well in advance.

Stonehenge is one of Britain's great archaeological mysteries: despite countless theories about the site's purpose, from a sacrificial centre to a celestial timepiece, no one knows for sure what drove prehistoric Britons to expend so much time and effort on its construction, although recent archaeological findings show the surrounding area was sacred for hundreds of years before work began.

The first phase of building started around 3000 BC, when the outer circular bank and ditch were erected. A thousand years later, an inner circle of granite stones, known as bluestones, was added. It's thought that these mammoth 4-tonne blocks were hauled from the Preseli Mountains in South Wales, some 250 miles away – an extraordinary feat for Stone Age people equipped with only the simplest of tools. Although no one is entirely sure how the builders transported the stones so far, it's thought they probably used a system of ropes, sledges and rollers fashioned from tree trunks – Salisbury Plain was still covered by forest during Stonehenge's construction.

Around 1500 BC, Stonehenge's main stones were dragged to the site, erected in a circle and crowned by massive lintels to make the trilithons (two vertical stones topped by a horizontal one). The sarsen (sandstone) stones were cut from an extremely hard rock found on the Marlborough Downs, 20 miles from the site. It's estimated that dragging one of these 50-tonne stones across the countryside would require about 600 people.

Also around this time, the bluestones from 500 years earlier were rearranged as an inner bluestone horseshoe with an altar stone at the centre. Outside this the trilithon horseshoe of five massive sets of stones was erected. Three of these are intact; the other two have just a single upright. Then came the major sarsen circle of 30 massive vertical stones, of which 17 uprights and six lintels remain.

Much further out, another circle was delineated by the 58 Aubrey Holes, named after John Aubrey, who discovered them in the 1600s. Just inside this circle are the South and North Barrows, each originally topped by a stone. Like many stone circles in Britain (including Avebury, 22 miles away), the inner horseshoes are aligned to coincide with sunrise at the midsummer solstice, which some claim supports the theory that the site was some kind of astronomical calendar.

Prehistoric pilgrims would have entered the site via the Avenue, whose entrance to the circle is marked by the Slaughter Stone and the Heel Stone, located slightly further out on one side.

Long-term plans to move the main A303 road, which runs close to the site, into a tunnel are still being debated. The proposed tunnel aims to reduce traffic around Stonehenge, although some commentators fear it could damage other, as yet undiscovered, monuments in the area.

The last admission to Stonehenge is two hours before closure. Visiting the site is free for English Heritage and National Trust members, but they still have to secure a timed ticket.