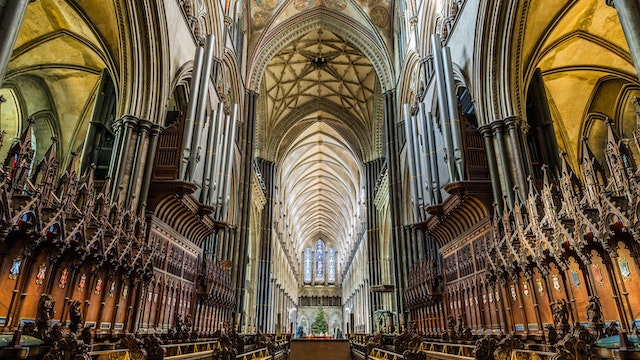 England is endowed with countless stunning churches, but few can hold a candle to the grandeur and sheer spectacle of 13th-century Salisbury Cathedral. This early English Gothic–style structure, built between 1220 and 1258, has an elaborate exterior decorated with pointed arches and flying buttresses, and a sombre, austere interior designed to keep its congregation suitably pious. Its statuary and tombs are outstanding. Highlights of a visit here are the cathedral’s original 13th-century copy of Magna Carta, and taking a tour of the tower.

Beyond its highly decorative West Front, a small passageway leads into the 70m-long nave, lined with handsome pillars of Purbeck stone. In the north aisle look out for a fascinating medieval clock dating from 1386, probably the oldest working timepiece in the world. At the eastern end of the ambulatory the glorious Prisoners of Conscience stained-glass window (1980) hovers above the ornate tomb of Edward Seymour (1539–1621) and Lady Catherine Grey. Other monuments and tombs line the sides of the nave, including that of William Longespée, son of Henry II and half-brother of King John. When the tomb was excavated a well-preserved rat was found inside Longespée's skull.

Salisbury's 123m crowning glory, its spire, was added in the mid-14th century, and is the tallest in Britain. It represented an enormous technical challenge for its medieval builders; it weighs around 6500 tonnes and required an elaborate system of cross-bracing, scissor arches and supporting buttresses to keep it upright. Look closely and you'll see the additional weight has buckled the four central piers of the nave.

Sir Christopher Wren surveyed the cathedral in 1668 and calculated that the spire was leaning by 75cm. A brass plate in the floor of the nave is used to measure any shift, but no further lean was recorded in 1951 or 1970. Despite this, reinforcement of the notoriously "wonky spire" continues to this day.

Tickets and other information

Timed tickets must be booked in advance via the website. These are valid for repeat visits for 12 months after purchase. Tickets include access to the Chapter House where you can view Magna Carta. Check the website for the availability of tours, including the very popular tower tours.

The cathedral really comes into its own during evensong. Again, you will need to book your visit in advance.