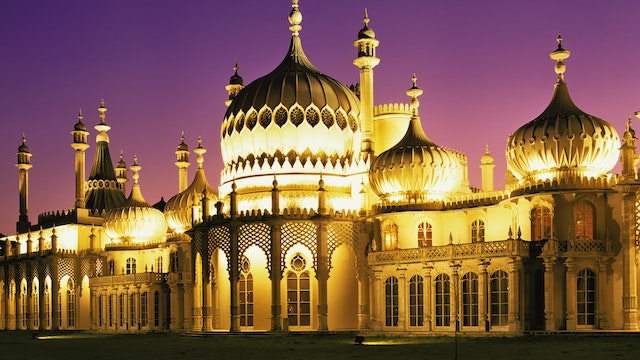 The Royal Pavilion is the city’s must-see attraction. The glittering party pad and palace of Prince George, later Prince Regent and then King George IV, it’s one of the most opulent buildings in England, and certainly the finest example of early 19th-century chinoiserie anywhere in Europe. It’s an apt symbol of Brighton’s reputation for decadence. An unimpressed Queen Victoria called the Royal Pavilion ‘a strange, odd Chinese place’, but for visitors to Brighton it’s an unmissable chunk of Sussex history.

The entire palace is an eye-popping spectacle, but some interiors stand out even amid the riot of decoration. The dragon-themed banqueting hall must be the most incredible in all of England. More dragons and snakes writhe in the music room, with its ceiling of 26,000 gold scales, and the then-state-of-the-art kitchen must have wowed Georgians with its automatic spits and hot tables. Prince Albert carted away all of the furniture, some of which has been loaned back by the present queen.