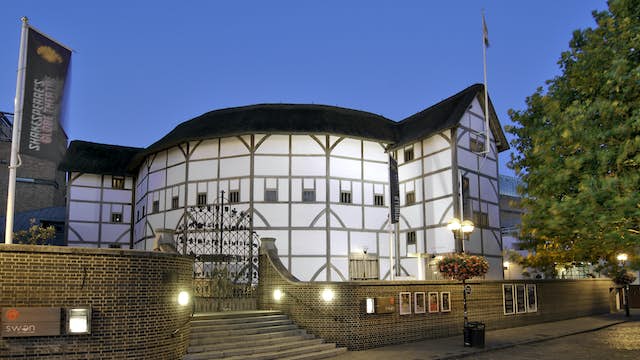 Seeing a play at Shakespeare's Globe – ideally standing under the open-air "wooden O" – is experiencing the playwright's work at its best and most authentic. You can also join an informative guided tour, which takes you around the theater and gives access to an exhibition about Shakespeare, theater in the 17th century and life in Bankside.

The current Shakespeare's Globe is located just 160m from its original location on Park Street from 1599, its footprint marked on the ground but partially covered by apartment blocks and Southwark Bridge. In 1613, the thatched roof caught fire after a theatrical cannon explosion during a performance of Henry VIII, and the theater burnt to the ground. The Globe was quickly rebuilt, and it remained the home of Shakespeare's company until 1642 when all theaters were closed by the Puritans. It was demolished a couple of years later.

Despite Shakespeare's worldwide popularity, the original Globe Theatre was almost a distant memory when American actor Sam Wanamaker came searching for it in 1949. He began fundraising for a memorial theater, and work started in 1987. Sadly, Wanamaker died four years before the theater opened in 1997.

Unlike other venues for Shakespearean plays, Shakespeare's Globe was designed to resemble the original Globe as closely as possible, from the materials used in construction to the open-air stage that exposes viewers to London's changeable skies. It's built with 600 oak pegs, specially fired Tudor-style bricks and thatch from Norfolk. The plaster contains goat hair, lime and sand, as it did in Shakespeare’s time.

Shakespeare wrote for both outdoor and indoor theater, and outside the Globe's April to October season, the Sam Wanamaker Playhouse – an indoor candlelit Jacobean-style theater similar to what Shakespeare would have used in winter – puts on year-round performances.

Plays run in the Globe from April to October, and tickets can be bought for as little as £5 if you're willing to stand throughout. During the season there are fewer tours, especially during afternoons when matinees are showing, so make sure you visit in the morning. Tours are on foot (including steps) and last around 50 minutes. Plays and tours take place whatever the weather – be sure to dress appropriately.