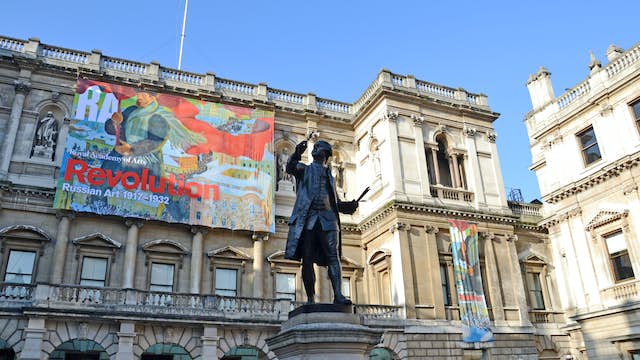 Britain’s oldest society devoted to fine arts was founded in 1768 and moved here to Burlington House a century later. For its 250th birthday in 2018, the RA gave itself a £56-million makeover. Its collection of drawings, paintings, architectural designs, photographs and sculptures by past and present Royal Academicians, such as Sir Joshua Reynolds, John Constable, Thomas Gainsborough, JMW Turner, David Hockney and Tracey Emin, has historically been male-dominated, but this is slowly changing.

In 2018 the academy expanded magnificently into 6 Burlington Gardens, a 19th-century former university building, behind the museum, providing another entrance and more room in which to display its permanent collection. Though more areas are open to the public for free, it's usually the temporary exhibitions that steal the show; prices vary, but tickets are usually £15 and up.

The rooms themselves are a treat; it was in the Reynolds Room on the 1st floor, for instance, that Charles Darwin first presented his groundbreaking ideas on evolutionary biology to the Linnean Society, which is still based here.

Burlington House’s courtyard features a stone-paved piazza with lights and fountains arranged to display the astrological star chart of Sir Joshua Reynolds, the RA's first president, on the night he was born. His statue stands in the centre. The courtyard is also the venue for temporarily installed statues and outdoor works by contemporary artists.

Free 30-minute guided tours of Burlington House run most days at 11.30am. Another tour departs at 12.30pm to explore the recently added building at Burlington Gardens.

The famous Summer Exhibition, which has showcased contemporary art for sale by unknown and established artists since 1769, is the RA's biggest annual event.