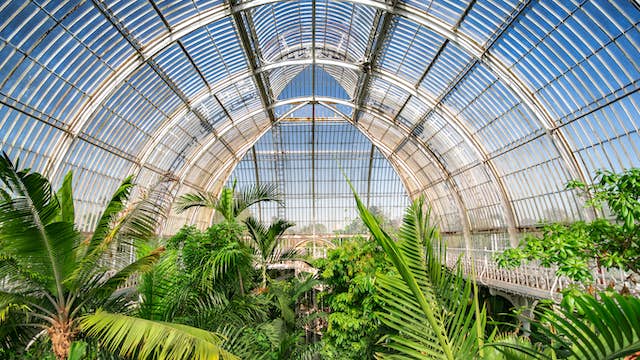 Where else in London can you size up an 18th-century 10-storey Chinese pagoda and a Japanese gateway while finding yourself among one of the world’s most outstanding botanical collections? Kew Gardens is loved by Londoners for its 19th-century Palm House and other Victorian glasshouses, its conservatories, tree-canopy walkway, architectural follies and mind-boggling variety of plants. The 121-hectare gardens at Kew should not be missed. Don't worry if you don’t know your quiver tree from your alang-alang: a visit here is a discovery for all.

Highlights include the enormous, steamy early Victorian Palm House, a hothouse of metal and curved sheets of glass; the impressive Princess of Wales Conservatory; the red-brick 1631 Kew Palace, formerly King George III's country retreat; the celebrated Great Pagoda, designed by William Chambers in 1762; the Temperate House, the world's largest ornamental glasshouse; and the very enjoyable Treetop Walkway, where you can survey the tree canopy from 18m up in the air.

The Hive is a 17m-high lattice fashioned from thousands of pieces of aluminium illuminated with hundreds of LED lights, which mimics activity within a real beehive. The arboretum covers two-thirds of the gardens at Kew and includes more than 14,000 trees, which are often gathered together according to genus. You can find everything from eucalyptus trees to giant redwoods and ancient Japanese pagoda trees.

Opened in 2016, the 320m-long Great Broad Walk Borders is the longest double herbaceous border in the UK. The idyllic, thatched Queen Charlotte’s Cottage in the southwest of the gardens was popular with "mad" George III and his wife, queen consort Charlotte of Mecklenburg-Strelitz. Stop by here in sprint to enjoy the beautiful carpets of bluebells. Kids will have a blast in the play areas including the huge interactive Children's Garden, which has the span of 40 tennis courts.

As well as being a public garden, Kew is a pre-eminent research center, maintaining its reputation as the most exhaustive botanical collection in the world.

Kew was founded in 1759 by Princess Augusta, mother of King George III, as a botanic garden with pleasure grounds. Botanists began rummaging around the world for specimens to plant here and they never stopped collecting. The gardens, which have bloomed to 121 hectares, provide the most comprehensive botanical collection on earth (including the world's largest collection of orchids). Kew Gardens became a Unesco World Heritage Site in 2003.

Tickets should be booked in advance online, with discounts available for family groups and concessions. Victoria Gate is a five-minute walk west from Kew Gardens Tube station. If you're traveling by train, alight at Kew Bridge station and cross Kew Bridge south to Kew Gardens. From April to October you can sail to Kew from Westminster with Thames River Boats. There is limited parking at the site.

You could easily spend the day here, but the Kew Explorer train will help you tick off the main sights in half that time. Seasonal events are held at Kew through the year, including Christmas light shows and summer concerts.