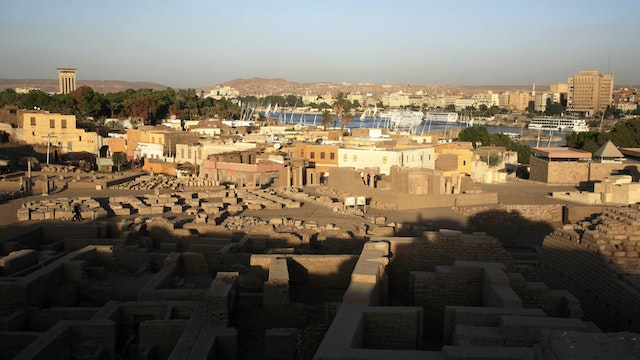 The evocative ruins of ancient Abu and the Aswan Museum (partially closed for renovation) lie at Elephantine Island's southern tip. Numbered plaques and reconstructed buildings mark the island’s long history from around 3000 BC to the 14th century AD. The largest structure on-site is the partially reconstructed Temple of Khnum (plaque numbers 6, 12 and 13). Built in honour of the god of inundation during the Old Kingdom, it was used for more than 1500 years before being extensively rebuilt in Ptolemaic times.

Other highlights include a small 4th-dynasty step pyramid, thought to have been built by Sneferu (2613–2589 BC; father of Khufu of Great Pyramid fame); a tiny Ptolemaic chapel (number 15), reconstructed from the Temple of Kalabsha (which is now just south of the High Dam); a reconstructed 18th-dynasty temple (number 2), built by Hatshepsut (1473–1458 BC) and dedicated to the goddess Satet; a cemetery for sacred rams (number 11), thought to have been the living embodiment of the god Khnum; and the ruins of an Aramaic Jewish colony dating from the 5th century BC.

The Nilometer of the Temple of Khnum, number 7, is below the southern balustrade of the Khnum temple. Heavenly portents and priestly prophecies aside, in ancient times only a Nilometer could give a real indication of the likelihood of a bountiful harvest. Built in the 26th dynasty, the Nilometer of Khnum has stone stairs leading down to a small basin for measuring the Nile’s maximum level. When the nilometer here in the southern frontier town recorded a high water level of the river, it meant a good harvest, which in turn meant more taxes. Another stairway, with a scale etched into its wall, leads to the water from the basin’s northern end.

Descending to the river’s edge from beneath a sycamore tree near the Aswan Museum is the Nilometer of the Satet Temple, number 10. Built in late Ptolemaic or early Roman times and restored in the 19th century, its staircase is roofed over, and niches in the walls would have had oil lamps to provide light. If you look hard as you descend to the river, you can see the names of Roman prefects carved into the left-hand wall.