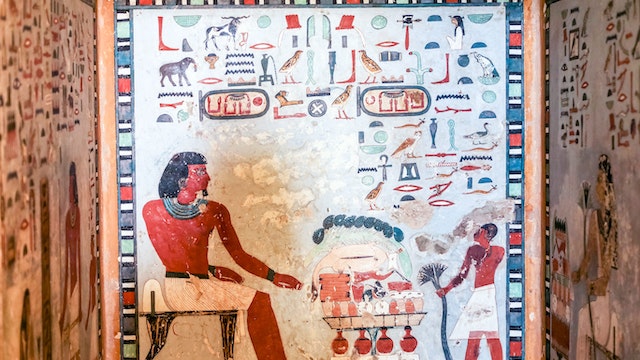 The high cliffs opposite Aswan, just north of Kitchener’s Island, are honeycombed with the tombs of the governors, the Keepers of the Gate of the South, and other dignitaries of ancient Elephantine Island. The tombs, known as the Tombs of the Nobles, are still being excavated: significant finds were made in 2014 and 2017. Six decorated tombs are currently open to the public.

The tombs date from the Old and Middle Kingdoms and most follow a simple plan, with an entrance hall, a pillared room and a corridor leading to the burial chamber. A set of stairs cutting diagonally across the hill takes you up to the tombs from the ferry landing.

The adjoining tombs of father and son Mekhu and Sabni (tomb numbers 25 and 26), both governors, date from the long reign of 6th-dynasty Pharaoh Pepi II (2278–2184 BC). The reliefs in Sabni’s tomb record how he led his army into Nubia to punish the tribe responsible for killing his father during a previous military campaign, and to recover his father’s body. Upon his return, Pepi II sent him his own royal embalmers and professional mourners, to show the importance accorded to the keepers of the southern frontier. Several reliefs in Sabni’s tomb retain their original colours, and there are some lovely hunting and fishing scenes depicting him with his daughters in the pillared hall.

Sarenput was the local governor and overseer of the priesthood of Satet and Khnum under 12th-dynasty Pharaoh Amenemhat II (1922–1878 BC). The tomb of Sarenput II (number 31) is one of the most beautiful and best-preserved tombs, its colours still vivid. A six-pillared entrance chamber leads into a corridor with six niches holding statues of Sarenput. The burial chamber has four columns and a niche with wall paintings showing Sarenput with his wife (on the right) and his mother (on the left), as well as hunting and fishing scenes.

The tomb of Harkhuf (number 34), governor of the south during the reign of Pepi II, is hardly decorated, except for remarkable hieroglyphic texts about his three trading expeditions into central Africa, right of the entrance. Included here is Pepi II, then only a boy of eight, advising Harkhuf to take extra care of the ‘dancing pygmy’ he had obtained on his travels, as the pharaoh was very keen to see him in Memphis. ‘My majesty desires to see this pygmy more than the gifts of Sinai or of Punt,’ Harkhuf writes. Look carefully to see the tiny hieroglyph figure of the pygmy several times in the text.

Hekaib, also known as Pepinakht, was overseer of foreign soldiers during the reign of Pepi II. He was sent to quell rebellions in both Nubia and Palestine, and was even deified after his death, as is revealed by the small shrine of Hekaib built on Elephantine Island during the Middle Kingdom (c 1900 BC). Inside the tomb of Hekaib (number 35), fine reliefs show fighting bulls and hunting scenes.

The court of the tomb of Sarenput I (number 36), grandfather of Sarenput II and governor during the 12th-dynasty reign of Sesostris I (1965–1920 BC), has the remains of six pillars, decorated with reliefs. On each side of the entrance Sarenput is shown being followed by his dogs and sandal-bearer, his flower-bearing harem, his wife and his three sons.