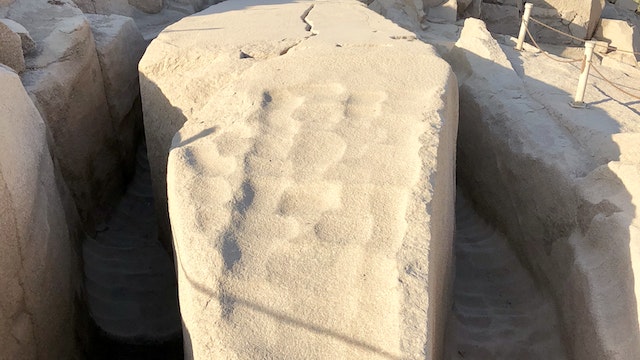 Aswan was the source of ancient Egypt’s finest granite, used to make statues and embellish temples, pyramids and obelisks. The large unfinished obelisk in the Northern Quarries has provided valuable insight into how these monuments were created, although the full construction process is still not entirely clear. Three sides of the shaft, nearly 42m long, were completed except for the inscriptions. At 1168 tonnes, the completed obelisk would have been the single heaviest piece of stone the Egyptians ever fashioned.

At a late stage in the process, however, a flaw appeared, so it lies where the disappointed stonemasons abandoned it, still partly attached to the parent rock.

Upon entering the quarry, steps lead down into the pit of the obelisk, where there are ancient pictographs of dolphins and ostriches or flamingos, thought to have been painted by workers at the quarry. The Northern Quarries are about 1.5km from town, opposite the Fatimid Cemetery. Microbuses will drop you within a few minutes' walk. Private taxis will charge about LE20 to LE25.