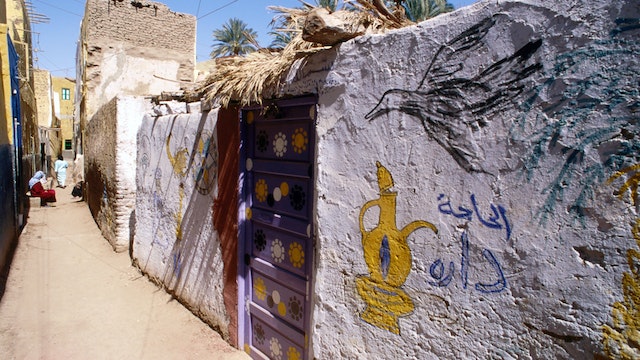 Elephantine Island's southern end comprises the site of ancient Abu. Its name meant both 'elephant' and 'ivory' in ancient Egyptian, a reminder of the important role the island once played in the ivory trade. The island's Nubian villages of Siou and Koti make a surprising counterpoint to the bustle of the city across the water.

The island lies opposite central Aswan, just north of the First Cataract. A recent building boom has changed its nature, but it remains calm and essentially rural.

At the beginning of the 1st dynasty (about 3000 BC) a fortress was built on the island to establish Egypt’s southern frontier. Abu soon became an important customs point and trading centre. It remained strategically significant throughout the Pharaonic period as a departure point for the military and commercial expeditions into Nubia and the south. During the 6th dynasty (2345–2181 BC) Abu gained its strength as a political and economic centre and, despite occasional ups and downs, the island retained its importance until the Graeco-Roman period.

As well as being a thriving settlement, Elephantine Island was the main cult centre of the ram-headed god Khnum (at first the god of the inundation, and from the 18th dynasty worshipped as the creator of humankind on his potter’s wheel), Satet (Khnum’s wife, and guardian of the southern frontier) and their daughter Anket. Each year the rushing of the waters of the flood were first heard here on Elephantine Island. Over time religious complexes took over more and more of the island, so residential areas moved either further north on the island or to the east bank. The temple town of Abu received its coup de grâce in the 4th century AD, when Christianity was established as the imperial Roman religion. From then on, worship of the ancient gods was gradually abandoned and defensive fortifications were moved to the east bank, today’s city of Aswan.

Siou and Koti villages lie between the ruins in the south and the Mövenpick Resort, which fills the northern end of the island. A north–south path crosses the middle of the island and links the two villages. Close to the wall separating the Mövenpick Resort from Siou village, facing Kitchener’s Island, is Baaba Dool, a gorgeous painted Nubian house, where the owner Mustapha serves tea, sells Nubian handicrafts and can arrange live music and dancing performed by local women. The roof terrace is the perfect place to watch the sunset on the west bank, with a multitude of birds flying around the island opposite. Also in the villages is Animalia, a charming Nubian museum.

Western women should be respectful of local tradition and wear modest clothes. More and more visitors prefer to enjoy the traditional set-up of the villages, and rent flats or houses here for a few days.