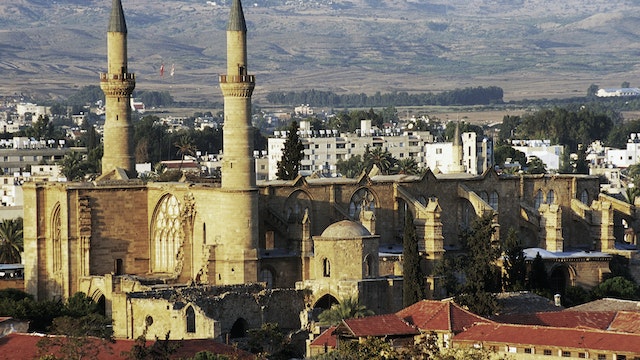 North Nicosia’s most prominent landmark (also clearly visible from the southern half of the city), the Selimiye Mosque is a beautiful building. A cross between a French Gothic church and a mosque, its fascinating history stretches back to the 13th century. Although it's a working place of worship, non-Muslims may visit, except during prayer time. For the most atmosphere, time your visit either just before or after one of the five daily prayer sessions.

Work started on the church in 1209 and progressed slowly. Louis IX of France, on his way to the Crusades, stopped by in 1248 and gave the building process a much-needed shot in the arm by offering the services of his retinue of artisans and builders. The church took another 78 years to complete, however, and was finally consecrated in 1326 as the Church of Agia Sofia.

Until 1570 the church suffered depredation at the hands of the Genoese and the Mamelukes, and severe shakings from two earthquakes in 1491 and 1547. When the Ottomans arrived in 1571, they stripped the building of its Christian contents and added two minarets, between which the Turkish Cypriot and Turkish flags now flutter. The Gothic structure of the interior is still apparent despite Islamic overlays, such as the whitewashed walls and columns, and the reorientation of the layout to align it with Mecca. Note the ornate west front with its three decorated doorways, each in a different style. Also look out for four marble columns relocated from Ancient Salamis and now placed in the apse off the main aisles.