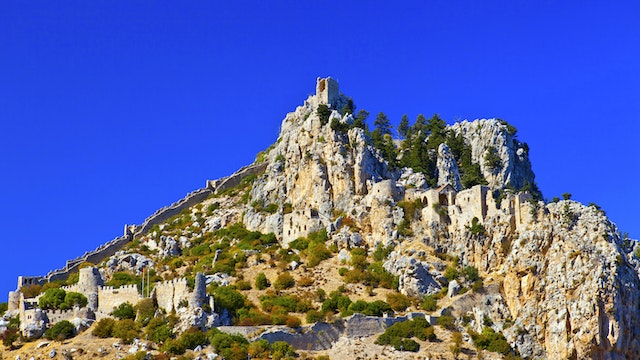 The full fairy-tale outline of St Hilarion Castle only becomes apparent once you’re directly beneath it. The stone walls and half-ruined buildings blend into the rocky landscape, creating a dreamscape castle plucked from a child’s imagination, complete with hidden rooms, tunnels and crumbling towers.

The site has three main parts: the lower enceinte (fortified defensive enclosure), the upper enceinte and Prince John’s Tower, all linked by steep staircases. The stunning views are well worth the arduous climb to the top.

Rumour has it that Walt Disney drew inspiration from the jagged contours of St Hilarion when he created the animated film Snow White. And a local folk legend tells that the castle once boasted 101 rooms, the last of which led to a secret internal garden that belonged to a fairy queen. This enchantress was known for seducing hunters, shepherds and travellers who stumbled into her lair and robbing them after placing them into a deep slumber.

The castle’s real history is a bit less fantastic. The lofty fort is named after the monk Hilarion, who fled persecution in the Holy Land. He lived (and died) in a mountain cave that overlooked the Kyrenia plain, protecting the pass between the coast and Nicosia (Lefkosia).

In the 10th century the Byzantines built a church and monastery over Hilarion’s tomb. Due to the site’s strategic position, it was used as a watchtower and beacon during the Arab raids of the 7th and 8th centuries and was an important link in the communication chain between Buffavento and Kantara Castles further east.

In 1191 Guy de Lusignan seized control of St Hilarion, defeating the self-proclaimed Byzantine emperor of Cyprus, Isaak Komninos. The castle was then extensively expanded and used as both a military outpost and a summer residence of the Lusignan court. Later, during Venetian rule, the castle was neglected and fell into disrepair.

In 1964 the Türk Mukavemet Teşkilatı (TMT), an underground Turkish nationalist group, took control of the castle, again for its strategic position. It has been in Turkish Cypriot hands ever since, with a sheltered Turkish military base located on the ridge below.

You enter by the barbican main gate into the lower enceinte, once used as the main garrison and stabling area. Then follow the meandering path up to the middle enceinte, originally protected and sealed by a drawbridge. Here you'll find remains of the church, barrack rooms, four-level royal apartments and a large cistern, vital to the storage of water.

Access to the upper enceinte is via a paved winding track, which leads to the Lusignan Gate. Guarded by the Byzantine tower, it opens on to the central courtyard, adorned with more royal apartments, kitchens and ancillary chambers.

One last climb takes you to Prince John’s Tower. Legend has it that Prince John of Antioch became convinced his two Bulgarian bodyguards were plotting to assassinate him and had them thrown from the cliff, to their deaths.

From the tower on clear days you can see the Taurus Mountains, 100km away in Turkey.

In summer it’s best to arrive early and avoid climbing in the heat of the day.