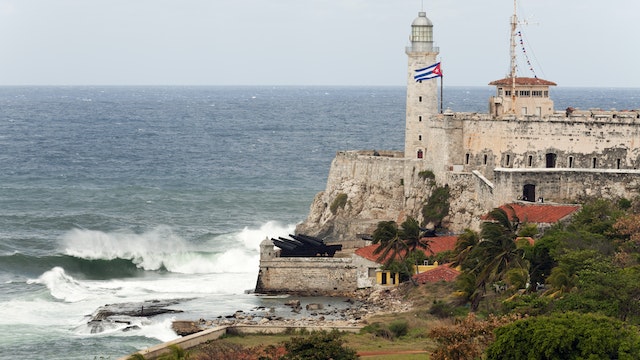 This wave-lashed fort with its emblematic lighthouse was erected between 1589 and 1630 to protect the entrance to Havana harbor from pirates and foreign invaders (French corsair Jacques de Sores had sacked the city in 1555). Perched high on a rocky bluff above the Atlantic, the fort has an irregular polygonal shape, 3m-thick walls and a deep protective moat, and is a classic example of Renaissance military architecture.

For more than a century the fort withstood numerous attacks by French, Dutch and English privateers, but in 1762, after a 44-day siege, a 14,000-strong British force captured El Morro by attacking from the landward side. The Castillo's famous lighthouse was added in 1844.

Aside from fantastic views over the sea and the city, El Morro hosts several exhibits, including a riveting account of the fort's siege and eventual surrender to the British that uses words (in English and Spanish) and paintings.