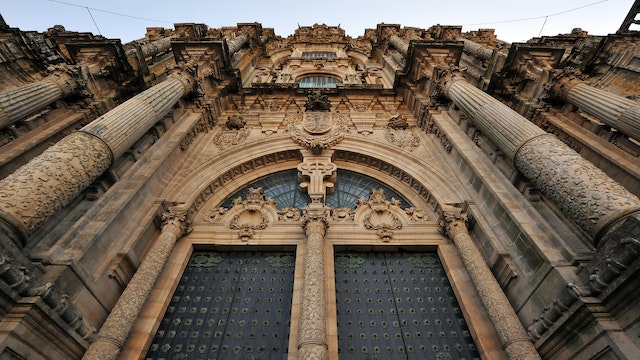 The crowning architectural glory of the Dalmatian coast and the undisputed masterpiece of its principal designer, Juraj Dalmatinac, this World Heritage Site is worth a detour to see. It was constructed entirely of stone quarried from the islands of Brač, Korčula, Rab and Krk, and is reputed to be the world’s largest church built completely of stone without brick or wooden supports. The structure is also unique in that the interior shape corresponds exactly to the exterior.

Dalmatinac was not the first (nor the last) architect to work on the cathedral. Construction began in 1431, but, after 10 years of toying with various Venetian builders, the city appointed Dalmatinac, a Zadar native, who increased the size of the building and transformed the conception of the church into a transitional Gothic-Renaissance style. The unusual domed-roof complex was completed after Dalmatinac’s death by Nikola Firentinac, who continued the facade in a pure Renaissance style. It was all finally completed in 1536.

The cathedral's most unusual feature is the frieze of 71 heads on the exterior walls at the rear of the building. These portraits – placid, annoyed, comical, proud and fearful – almost appear to be caricatures but are depictions of ordinary 15th-century citizens. The building cost a great deal to construct, and it’s said that the stingier the individual, the grosser the caricature.

Note also the Lion’s Portal on the northern side, created by Dalmatinac and Bonino da Milano, in which two lions support columns containing the figures of Adam and Eve, who appear to be excruciatingly embarrassed by their nakedness.

Pick up the excellent brochure (available in various languages) as you enter the church; it provides a self-guided circuit of the many artworks and architectural features inside. A highlight is Dalmatinac’s extraordinary baptistery in the rear corner, with its exquisitely carved ceiling and font supported by three angels.

Other interior artworks worth noting are the tomb of Bishop Šižigorić (by Dalmatinac), who supported the building of the cathedral; the altar painting of St Fabian and St Sebastian (by Filippo Zaniberti); and a particularly gruesome 15th-century Gothic crucifix (by Juraj Petrović).