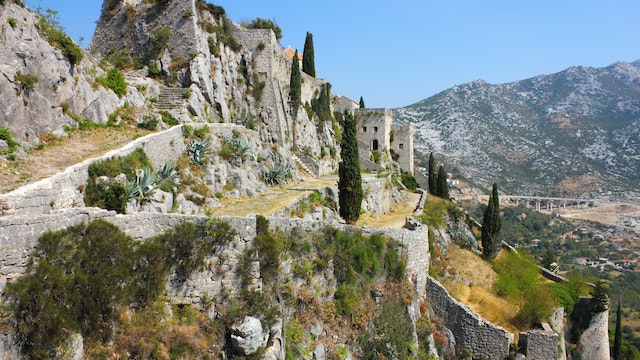 Controlling the valley leading into Split, the imposing Klis Fortress spreads along a limestone bluff, reaching 1260ft (385m) at its highest point. Its long and narrow form derives from constant extensions over the course of millennia. Inside, you can clamber all over the fortifications and visit the small museum.

Klis' history (in a nutshell) goes like this: founded by the Illyrians in the 2nd century BCE; taken by the Romans; became a stronghold of medieval Croatian duke Trpimir; resisted attacks for 25 years before falling to the Turks in 1537; briefly retaken in 1596; finally fell to the Venetians in 1648.

A series of highly informative but very wordy panels detailing this long and complicated history is displayed in a 17th-century, Venetian-built armory in the inner part of the fortress. The room also contains a collection of 17th- to 19th-century muskets, swords and armor, and a mock-up of the sort of garb worn by the Uskoks, the local warriors who defended the castle from the Turks.

There are three gates to pass through before you reach the inner part of the fortress. The ticket office is located in the main gate at the lower end of the complex, built by the Austrians in the 1820s. From here a path twists up to the second gate, which was the main entrance in the Middle Ages – although its current form is also courtesy of the Austrians. The last gate, also medieval, is reached by a set of stone steps at the far end of the fort. Its current appearance is from a Venetian reconstruction in 1763.

At the heart of the upper fortress is a simple, square church topped with a dome, dedicated to St Vitus (Sv Vid). During the Turkish occupation it was converted into a mosque. The views from the entire fortress are remarkable, but no less so than at the very top, taking in all of the sprawling city of Split and the islands beyond.

Game of Thrones fans will probably recognize the fortress as Meereen, where Daenerys Targaryen had all those nasty slave-masters crucified in season four. If you're having trouble visualizing Klis in its GoT guise, there's a display of stills from the show in an 18th-century gunpowder chamber in the top part of the fortress.

How to get there and other practicalities

Klis is located 7 miles (12km) northeast of the city center, and can be reached by bus from Split's local bus station.

In summer, time your visit for the morning. It gets scorching hot up there and there's little shade. Finish with lunch at one of Klis' renowned spit-roast restaurants. If you've hired a car for the day, Klis can easily be combined with a trip to the ruins of Salona.