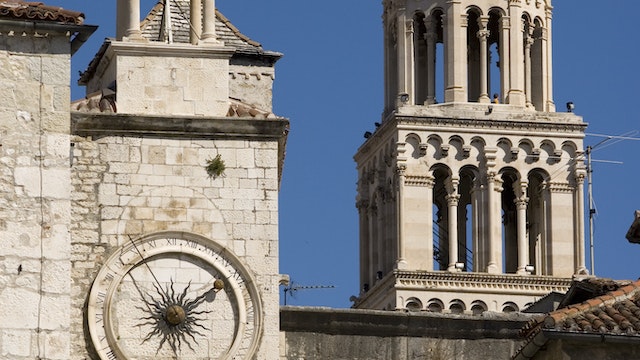 Split’s octagonal cathedral is one of the best-preserved ancient Roman buildings still standing. It was built as a mausoleum for Diocletian, the last famous persecutor of the Christians, who was interred here in AD 311. In the 5th century the Christians got the last laugh, destroying the emperor's sarcophagus and converting his tomb into a church dedicated to one of his victims. Note that a ticket for the cathedral includes admission to its crypt, treasury and baptistery (Temple of Jupiter).

The exterior of the building is still encircled by an original colonnade of 24 columns. A much later addition, the tall Romanesque bell tower, was constructed between the 13th and 16th centuries and reconstructed in 1908 after it collapsed. Tickets are sold separately for those eager to climb up for views over the old town's rooftops. You'll need a head for heights, though, as the steep stone stairs quickly give way to flimsy metal ones suspended over the internal void.

In summer, visitor access to the cathedral is via the sacristy, situated in an annexe around the right-hand side of the building. This structure also houses the cathedral's treasury, which is rich in reliquaries, icons, church robes, illuminated manuscripts and documents in Glagolitic script. In the low season, entry is via the front door and the treasury isn't open to the public (tickets are 10KN cheaper when the treasury is closed).

Inside the cathedral itself, the domed interior has two rows of Corinthian columns and a frieze running high up on the walls that, surprisingly, still includes images of the emperor and his wife. To the left of the main altar is the altar of St Anastasius (Sveti Staš; 1448), carved by Juraj Dalmatinac. It features a relief of The Flagellation of Christ that is considered one of the finest sculptural works of its time in Dalmatia.

The choir is furnished with 13th-century Romanesque seats, the oldest of their kind in Dalmatia. Other highlights include a 13th-century pulpit; the right-hand altar, carved by Bonino da Milano in 1427; and the vault above the high altar, decorated with murals by Dujam Vušković. As you leave, take a look at the remarkable scenes from the life of Christ on the wooden entrance doors. Carved by Andrija Buvina in the 13th century, the images are presented in 28 squares, 14 on each side, and recall the fashion of Romanesque miniatures of the time.

Don't forget to take a look in the crypt, accessed by an exterior door on the right side of the church. Now a chapel dedicated to St Lucy, it's an eerily quiet chamber that stays cool even on the hottest days.

If you're interested in the technical aspects of the building's architecture, check out the free New Research on Split Cathedral exhibition in the building opposite the main entrance.