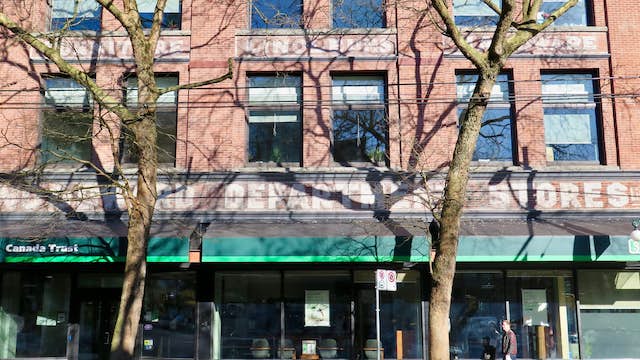 The project that catalyzed latter-day Downtown Eastside redevelopment, this former iconic department store was a derelict shell after closing in the early 1990s. Successive plans to transform it failed until it was eventually recreated and reopened as the home of new shops and condos, a trigger for what many have labeled neighborhood gentrification. Check out the monumental 'Gastown Riot' photo montage inside.

The Woodward's W-shaped red neon sign that stood atop the building for decades was replaced with a reproduction when the new development was completed; the old one is preserved behind glass at ground level near the Cordova St entrance. If you get the angle right (which might mean lying on the sidewalk), you can snap an image of both signs at the same time.